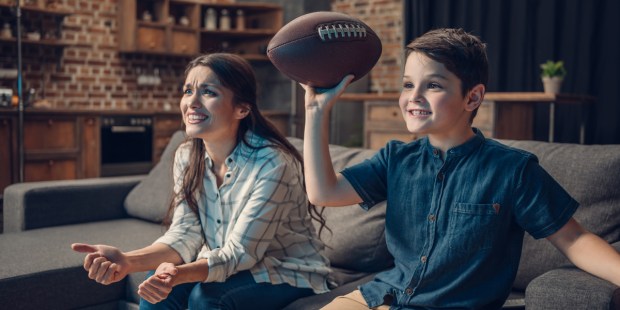 For years after my husband died, no one in our family could watch the game … until one day.

My late husband was the most spiritually serious and sensible person I ever knew, and he was also a huge sports fan. NASCAR most of all, and then all the other sports, especially those that involved Florida teams, and especially football. I ranged between indifference and SJW snark. It’s a waste of money and resources, it’s exploitative, it’s a distraction, it’s concussions. But I had to rein all that in, I had to reconsider, I had to pause because, indeed, he was so serious about the God Stuff but still loved his football, it made you think. It’s not that you give in completely, no. It’s that you just see another point of view, it’s just that if you are going to live and love you must stay true to yourself and say yes and no to what you think is right, but you also – oh, you must live in empathy, too, and maybe you don’t have all the answers, and maybe you don’t see the whole picture, just you alone.

And it seemed as if he was passing it on. I have this particular memory of an Indiana winter. Our older son was probably about five years old, and it was a Sunday afternoon. The two of them were seated on the couch, and the NFL hustled and grunted on the television screen. I was going out shopping. I waved good-bye. I left them, son on dad’s lap, son talking a mile a minute about what was on the screen, asking questions, keeping up a running commentary on I don’t know what. I returned two or three hours later. The two of them were in the exact same position. My son was still talking. I raised my eyebrows in wonder. My husband shook his head and made that talking gesture with his hand. You know the one, like a clacking duck’s beak. He shrugged. This was the way it was, and there was a lot to talk about, even if you were five. It was football. It was good. It would always be this way, and it was a comfortable, lovely warm thing.

A couple of years later, we moved to Alabama. The older one was seven, the younger was three. It seemed pretty clear how things were going to shake out. The older one couldn’t stand the noise of engines, but the younger one thrived on it, but was, in turn, uninterested in team sports. So my husband would have his sports buddies, it seemed. The younger one for the races, and the older one for football and basketball. It would just go on and on.

And then he died.

A few weeks after he died, we used the tickets to a UAB basketball game that he’d bought for the three of them. It was not a given that we would go, and I asked the oldest if he wanted to and he answered yes, of course. I think UAB was playing a Florida team, or maybe an Indiana one. So on a Saturday afternoon, we trooped over to the arena, and sat there, and all I could remember was years of sitting next to him at sporting events and I’m sure it was all they could remember too. I felt it. In a crowd of thousands, all I felt was stark, terrible absence, and I’m sure it is what the boys felt as small as they were – even perhaps especially because of it –  and so at halftime, I looked at them.

The older one shook his head.

“It’s not the same without Daddy, is it?”

He bit his lip and his eyes glistened. So did mine.

A few months later, it was late summer, and life had gone on. We had been on this massive trip to Siciliy and Spain which had recalibrated life in a radical way and third grade was coming, and so was something else. Football.

Anxious to keep going, but still make connections, and build on the past and look into the future and whatever else you do, at some point in the beginning of August, six month after, I put on my most cheerful face, my Forge on With Faith Face, and thinking that the Worst Was Surely Over,  I pointed out this most interesting, exciting fact about what had always been such an important part of life in our house:

That eight-year old didn’t look up from whatever he was doing. He didn’t cry, he didn’t shout and he didn’t pause to consider. He simply uttered what his heart was beating:

And so we didn’t that year. Any of it. College or pro. It was not on our television, and it was as if it had never happened and would never again.

A year passed. I bought a house here in town, because really, where else was there to go? A cunning frame bungalow that was all about starting over. We had been to counseling, sister was starting her senior year, little brother would be in kindergarten. One older brother, David, was back from Rome living with us and going to grad school, the other, Chris – the much older one – was still in Atlanta, working in sports media. Everyone was doing what they could, everyone was conscious of absence, everyone trying to figure out what that meant, how to live, what to take forward and what to just leave behind and how to help.

The summer melted us, then started to wane, and once again the talk out there was of rankings and quarterbacks and such and this time I didn’t know what to say. Nothing, I thought. I’ll say nothing.

Then one day, the nine-year old looked up from something. Maybe he was watching television, maybe we were driving home from school. I don’t know. I just remember what he said, out of the blue, after more than a year.

“Do you think,” he ventured, “Chris could take me to a Falcons game this season?”

Sooner than you know, I was on the phone. YES was the answer, for he got it, he understood. Of course.

It is seven years later now. I am still not a fan and could still give speeches if you asked, but I won’t. Because on Saturday and Sunday afternoon, there he sits. He makes sure he is here for Florida and Indiana, he likes the Vikings and Chargers, and once I even worked it so he could meet Philip Rivers, and that, I tell you, was a great day.

Not because football is anything transcendent or even inherently good, but just because it is a game that men play and men watch and maybe, I think, as the 15-year old sits there, almost as tall as his father was now, still chatting up a storm, a running commentary full of facts that I listen to the best I can, yes, it is fine and even good, warm and lovely. And maybe in this very good present, maybe in these weekends filled with color, noise, conflict and life, maybe, just maybe watching football on the couch … maybe that boy remembers.

This article was originally published at Charlotte Was Both and is reprinted here with permission.