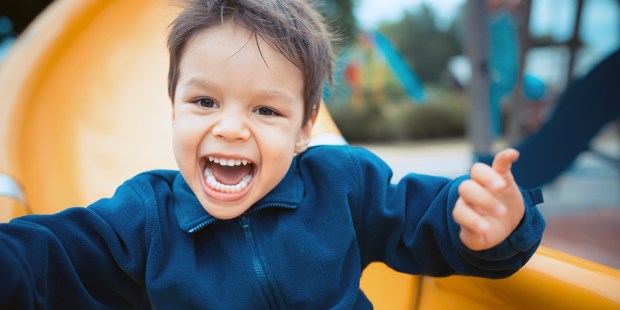 But unfortunately, many people dismiss it as frivolous …

Okay, we had a great summer! Hopefully, we knocked a few things off the bucket list, got in the water as much as possible, and gorged ourselves on watermelon. But it’s September now, which means playtime is over. The kids are settling back into school, and after the months of unencumbered fun, it’s time to get to work.

Not so fast. When we’re talking about kids, we might be making way too strong a distinction between work and play. As important as it is for our children to be educated, playing is an absolutely necessary part of a child’s education, and just because the school year has started doesn’t mean they don’t still have a serious developmental need to play.

According to a new report from the American Academy of Pediatrics, released in August, “Play is not frivolous: it enhances brain structure and function and promotes executive function (ie, the process of learning, rather than the content), which allow us to pursue goals and ignore distractions.”

Did you catch that? The benefits that kids get from playing literally make it easier for them to learn in school. Schools gives them the content of their education, but play gives them the ability to engage with that content, and retain it.

The AAP report goes on, “Developmentally appropriate play with parents and peers is a singular opportunity to promote the social-emotional, cognitive, language, and self-regulation skills that build executive function and a prosocial brain. … Play supports the formation of the safe, stable, and nurturing relationships with all caregivers that children need to thrive.”

If you can get past the dry language, you’ll see that these aren’t little things. Having good self-regulation skills and executive function isn’t just icing on the cake. I think parents usually want to treat play as if it’s the dessert part of the meal: it’s nice, but it’s just a treat. It’s not necessary. But the latest recommendations say otherwise: “The importance of playtime with children cannot be overemphasized.”

What kind of playing are we talking about? Not technology and media, the report stresses, although those can be somewhat salvaged if you are or playing that video game with your child, and interacting with them directly. Unstructured play time, when there isn’t a set of rules to follow and the child can be let by his own curiosity, is always best. It doesn’t have to take hours; it’s actually even better when little, joyful moments are built into the day.

Hey, you’re the parent. You probably don’t need instructions on how to play with your kid. But in this world of increasing pressure for kids to test high and learn everything as early as possible, maybe you just needed to hear that letting your kid have fun isn’t actually going to hurt his chances in school — actually, it’s just the opposite. So work as hard as you need to, but don’t forget that playing is important work too.