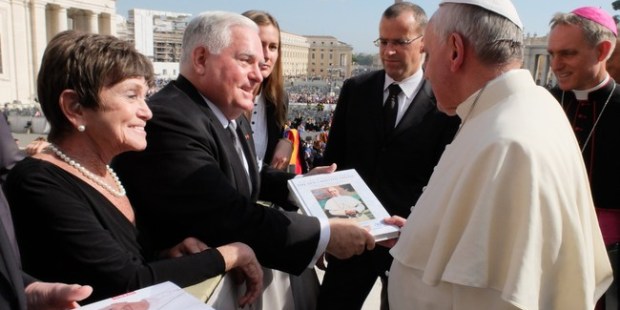 On October 1, Pope Francis will officially name Gary and Meredith Krupp, as Knight of the Grand Cross and Dame of the Grand Cross, honors conferred by the Vatican’s Order of St. Gregory the Great. The Krupps are the founders of the Pave the Way Foundation (PTWF), a non-profit dedicated to improving relations between different religions.

The recognition marks the first time since Order of St. Gregory the Great was created in 1831 that a husband and wife will be knighted together.

As founders of the Pave the Way Foundation, the Krupps have sought to break down obstacles between adherents of different religions and encourage inter-religious dialogue through cultural exchanges, talks, pilgrimages and work with young people.

The organization has condemned extremist violence carried out in the name of religion, and has called on all religions to do the same.

In addition, the foundation has worked to facilitate improved relations between the Vatican and the State of Israel, and has fought for the rights of Christians working and living in the Holy Land.

The Pave the Way Foundation has also been behind recent historical research on Pope Pius XII, who has been called “Hitler’s Pope” for his alleged Nazi sympathies.

Evidence that has emerged as a result of the research has gone far to rehabilitate Pope Pius’ reputation. Mark Riebling’s book, Church of Spies, for example, made use of primary sources discovered by the foundation’s research to assert that Pius took part in a plot to assassinate Hitler. Other research has revealed that the pope was directly involved in sheltering Jews in Rome from the Nazis.

In 2000 Pope John Paul II made Gary Krupp a Knight Commander of the Order of St. Gregory for his work in acquiring medical equipment for the Casa Sollievo della Sofferenza Hospital in Italy. He was only the seventh Jewish person to receive the honor.

Two years later, Krupp founded the Pave the Way Foundation, which he dedicated to improving relations between the Catholic and Jewish religions.