Japanese-American artist gets his inspiration from his Christian faith

Makoto Fujimura's paintings combine the tradition of his heritage with contemporary art.

In the days after an atomic bomb destroyed Hiroshima, Makoto Fujimura’s grandfather, the No. 2 in Japan’s education ministry, toured the devastation. In the weeks after al Qaeda destroyed Manhattan’s World Trade Center, Fujimura set out on a quest to rebuild culture.

Fujimura’s young family lived three blocks from Ground Zero. Rather than flee, he co-founded Tribeca Temporary, a collective for talented but traumatized displaced artists, according to Religion News Service. “The act of vision and generosity enhanced his career,” RNS wrote. “Grateful art-world players touted him; the White House appointed him to the National Council on the Arts; he gained a wider evangelical audience for his vision of God amid ‘the ever-expanding ground zeros of the world.'”

His work was distinctive and ambitious: from the raw orange flame climbing against a riverine background in “Ghost,” done shortly after 9/11, to a series reflecting the prose of Dante and T.S. Eliot, collaborations with musicians and other painters, and breathtaking modernist grids of gold leaf, another Japanese nihonga staple.

Known as Mako, Fujimura has enjoyed more success in the art world than perhaps any other contemporary painter who is mainly inspired by his Christian faith. Thanks to a partnership with film director Martin Scorsese, that success might go even further.

On Facebook this week, Fujimura posted about being “deeply moved” seeing a Pieta by Michelangelo in Florence.

“[Art historian] Msgr. Timothy Verdon recounted on this late piece before Michalangelo passed, and after his personal encounter experience with Christ (which was well documented in last year’s Michalangelo drawings exhibit at the Met),” Fujimura wrote. “He seemed to struggle with his new found faith, to reconcile that with the muscular visual diction he replied upon all his life.” 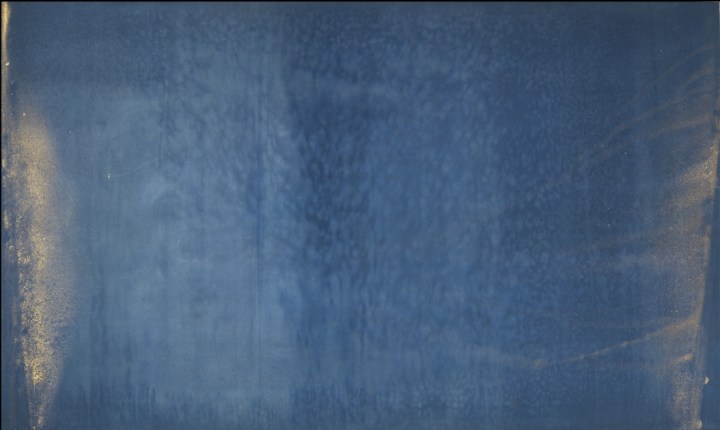 “I remember my encounter with Christ at the age 27 as a graduate student in Tokyo. I remember that it took two years to reconcile my own newfound faith with my expression. Michelangelo’s ‘unfinished’ painting is now referred to in an Italian at expression as ‘infinite’ painting. In the gap of an authentic struggle, art may give birth to incomplete gestures. [Michelangelo never completed this Pieta, and he even hammered the arm of Christ to destroy it, in the frustration] of a master, a genuine struggle that resonates in eternity.”

Just after his conversion to Christianity, Fujimura happened upon dozens of fumi-e—bronze and wooden tiles bearing an image of Jesus or the Virgin Mary—in a Tokyo museum. These were the images Japanese magistrates once forced Christian missionaries and native Christians to trample upon.

“Everything I’ve done has stemmed from that,” he told RNS in a 2017 interview.

He realized that in grade school he would play baseball on the beach at Kamakura, one of the places where they lined up Christians to step on the fumi-e. But perhaps he never would have dreamed that those fumi-e would also be at the heart of a partnership with Scorsese. In Scorsese’s 2016 film, Silence, two Catholic missionaries face the ultimate test of faith when they travel to Japan in search of their missing mentor. Catholicism was outlawed and their presence forbidden. Many, including missionaries, were forced to renounce their faith by trampling on fumi-e.

Fujimura is credited on the film as a “special adviser,” and wrote Silence and Beauty as a companion book to the film, which is based on Shusaku Endo’s 1966 novel. The text speculates about the impact upon Japan of its suppression of Christianity.

His artwork combines elements of the traditional nihonga tradition, in which pigments made from pulverized semiprecious stones refract seemingly infinitely, and a New York-style abstraction to create a unique look, RNS points out. “His sometimes dark concerns ran up against what Greg Wolfe, [former] editor of the religion-and-arts journal Image and an early champion, calls an evangelical resistance to ‘the idea of grace working through fallen things,’” according to the news service.

He is now starting a new work called “150,” a series meditating on the Psalms. He expects it to take at least three to five years to complete, he wrote on Facebook.

Fujimura has been named Visiting Scholar/Artist for the Fall term of 2019 with the School of Leadership Studies at Gonzaga University. This will involve an exhibition of his paintings in the Jundt Art Museum on campus from September through January, as well as a number of engagements around the themes of culture, beauty, and leadership.

“Mako’s work as a painter and a writer is a profound illumination, and makes vital contributions toward healing the heart of the world,” a statement from the university said. “At Gonzaga he will be in dialogue with students, faculty and community members, involving presentations, and a roundtable interview with Jesuit leaders through a showing of the Scorcese movie Silence. … Gonzaga is also honored to have Mako as artist in residence for some days in late September of 2019 for the opening of the exhibition.”

In the 2017 interview, Fujimura downplayed any suggestion that he’s a rising star in the art world.

“I’ve never wanted to be an art star,” he said. “The God of the Bible is an artist, perhaps the only true artist.”