What I learned from the “terrifying” Robert Frost 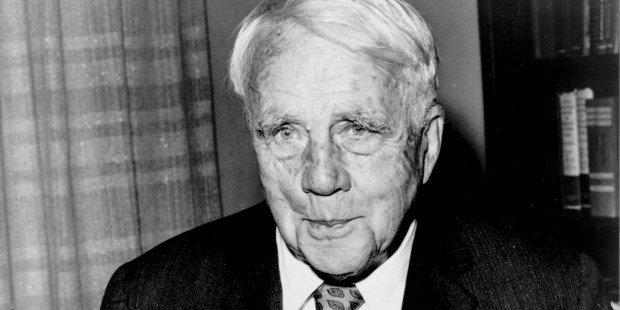 In spite of his disarming and folksy manner and engrossing pastoral settings, Frost shines light into the dark corners we wish to avoid.

He was turning 85, this gray, broad-shouldered poet.

A man of the New England fields and the mountainous campus of Middlebury College, Robert Frost might have felt ill-at-ease as center of a birthday celebration in New York’s palatial Waldorf-Astoria Hotel. Surrounded by lifelong friends, literary luminaries and admiring well-wishers, Frost settled in for the much anticipated words from the keynote speaker, literary critic and essayist Lionel Trilling.

But Trilling, an admirer of Frost, would shock the gathering.

He called Frost, “a terrifying poet.”

While this electrifying description — contrary to the attendees’ expectations — hung in the air, Trilling would elaborate. Robert Frost was more than he seemed. Not simply the avuncular quintessential American poet. Instead, Frost painstakingly penned “the terrible actualities of life.”

I mean, just think about it.

The poet who crafted Stopping by Woods on a Snowy Evening, Mending Wall, The Tuft of Flowers, and The Road Not Taken is “terrifying.” At first, I found this notion laughable. Just look at him. And read him. But upon further reflection, I think Lionel Trilling was spot on.

While at first blush, Frost’s work places you in some field, forest or farmyard, you have yet to apprehend the deep soul’s drama that is unfolding from one stanza to the next. The Tuft of Flowers speaks of the haunting sense of isolation and deep hunger for community, while Mending Wall reminds us of our need for healthy boundaries and room for meaningful interiority. Stopping by Woods on a Snowy Evening speaks to the soul’s craving for intentionality amid efficiency, while The Road Not Taken takes us to the gripping consequences of the well- or ill-chosen life. At the heart of these poems is the raw (one may even say Shakespearean) drama of being human. Frost’s work grapples with the nuance of existence. It is a delicate balance on the knife’s edge teetering between tragedy and redemption. Just take a moment to read Frost’s haunting poem, Come In (read the 20-stanza poem here) and consider what a fellow prisoner might have seen in the heroically selfless act of St. Maximilian Kolbe in the extermination camp at Auschwitz.

What makes Robert Frost terrifying is that he asks us to confront ourselves. In spite of his disarming and folksy manner and engrossing pastoral settings, Frost shines light into the dark corners we wish to avoid. Corners of loneliness and emptiness, nooks of lost purpose and harbored regret. But these efforts are not intended to depress or disillusion. Rather, they are intended to jar us into living more fully — to open our eyes to the depths of intentional living and away from the shallows of ego and appetite. It is a necessary — if not painful — journey to come to our better selves.

In speaking of this, Lionel Trilling received no small amount of criticism that he had misunderstood or besmirched the beloved poet on what was to be a grand old occasion. But Trilling in response tried to clarify that the nature of Frost’s work was not undermined but enhanced by the depths it went to in reckoning with the human condition. In so doing, it can make us better people for knowing ourselves. Oh, to be sure, this can be unsettling, even jarring.