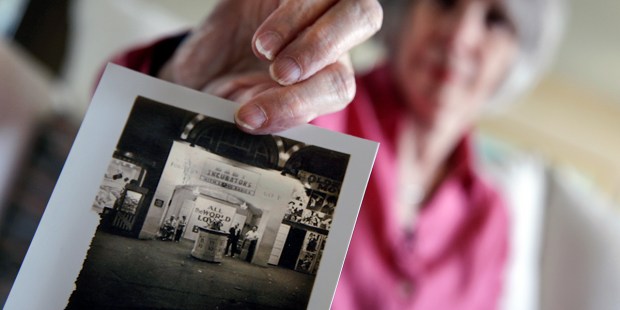 AP
Beth Allen displays a photograph of the incubator sideshow in Coney Island. She was one of the babies Martin Couney rescued.
Share
Print
Cynthia Dermody | Oct 02, 2018

The unlikely story of how the incubator became the standard of care for premature infants.

Today, if a baby is born premature (and 15 million are every year), he or she will be placed in an incubator to stay warm, be protected from germs, and receive help for breathing until the lungs are developed — as well as receiving other basic medical interventions. Millions of babies are alive today thanks to the time they spent in these warmers on the neonatal unit.

But who would have guessed that such a common fixture of most hospitals got its start as a circus sideshow? The kind where people would pay to put their noses up to the glass case and observe the incomprehensibly small infants resting inside?

The story of the incubator starts in 1880 with a French doctor named Dr. Étienne Stéphane Tarnier, who was looking to solve the problem that so many premature infants of his day faced — poor thermoregulation, the loss of heat from the body and subsequent hypothermia, leading to death. Tarnier was inspired to create a “heating chamber” after observing similar technology used with chickens at the Paris Zoo. What he invented looked like something you’d find in the supermarket freezer section, with glass fronted doors — not the sleek “pod” design of the modern machines.

Dr. Pierre Budin, at the L’Hôpital Paris Maternité, started using these boxes, and was so excited about them that he started publishing reports to get other doctors to use them. His colleagues dismissed his idea as quackery and medically unsound, but he refused to give up on the idea. Instead, he turned to an unlikely partner in the name of Dr. Martin Couney (there’s some skepticism about whether he was a real doctor), who brought the incubators to the Berlin Expo in 1896.

Apparently blessed with skills in showmanship as well as medicine, Dr. Couney took the assignment perhaps a step farther than what Dr. Budin had originally anticipated; Couney asked the Berlin Charity Hospital to borrow some premature babies for this experiment, and they granted his request, thinking that the children had little chance of survival anyway. When he managed to hire a cadre of nurses to fully demonstrate the capabilities of the incubators, he was ready to take the show on the road.

The traveling incubator show eventually found its way to the US at the World’s Fair, and eventually settled at “Dreamland” at Coney Island, New York, until a fire destroyed the park in 1911 and the babies were moved to another facility for 40 more years, saving the lives of thousands of children. Couney’s story is the subject of a recent book called The Strange Case of Dr. Couney: How a Mysterious European Showman Saved Thousands of American Babies.

Innovation works in mysterious ways, through those we might not expect. Millions of babies today are saved every year by Dr. Tarnier’s original concept, and not just the $50,000 high-tech versions found at medical centers. Compassionate inventions such as the mOm incubator — an inexpensive, infatable, portable incubator — as well as the more low-tech Embrace warmer are helping to reach mothers in countries without the basic medical resources that we take for granted.