During the opening Mass of the Synod of Bishops on the theme of young people and vocations, Pope Francis exhorted the bishops to listen to and accompany youth, reminding them that they too were once young. He explained that the situation today makes it more necessary than ever to follow the Holy Spirit with “Gospel ardour and passion” inspired in Jesus, asking the Spirit to preserve the memory of the Lord, “a memory that can rekindle and renew in us the capacity to dream and to hope.”

Hope seemed to be made real this morning, with the presence of two Chinese bishops in St. Peter’s Square in the wake of the Provisional Agreement between the Holy See and Beijing. Never before have Chinese prelates been permitted by their country to attend a synod.

Those present for the ceremony could hear how the pope’s voice broke, and he was almost in tears, as he said, “Today, for the first time, we have also with us two bishops from mainland China. We offer them our warm welcome: the communion of the entire Episcopate with the Successor of Peter is yet more visible thanks to their presence.”

Read more:
Pope writes explanation in wake of new accord with China on bishops

Their presence is the result of an enormous diplomatic effort that lasted more than 10 years. Since Vatican II, every Successor of Peter has tried to receive a positive response from mainland China allowing its bishops to travel to Rome.

The pope’s profound emotion today is a response to the nearly 10 million Chinese Catholics, especially the young people, who will by symbolically present during the Synod through their bishops.

“We know that our young people will be capable of prophesy and vision to the extent that we, who are already adult or elderly, can dream and thusbe infectious in sharing those dreams and hopes that we carry in our hearts (cf. Joel 2:28),” said Francis during the homily.

Moments before his welcoming gesture to the Chinese bishops, the pope had highlighted the “attitude of docile listening to the voice of the Spirit,” which united the 267 synod fathers this morning, who came from all around the world.Among them, 181 were chosen by their respective episcopal conferences, and 40 were named directly by the Pope.

In the midst of the sexual abuse scandal which is rocking the Church and driving away young people, as Francis acknowledged during his trip to the Baltic nations, the pope in his homily today expressed his desire for the assembly, which begins today and ends October 28, to “be a memory that is diligent, living and effective, that does not allow itself from one generation to the next to be extinguished or crushed by the prophets of doom and misfortune, by our own shortcomings, mistakes and sins.”

He also called the synod fathers to carry out their work “as free as possible from prejudice and conditioning,” so as to “look directly into the eyes of young people and see their situations,” not abandoning them along the way “in the hands of so many peddlers of death who oppress their lives and darken their vision.”

The pope concluded his homily recalling the closing message of the Second Vatican Council, which was addressed to young people. He then encouraged his listeners: “Dear Synod Fathers, the Church looks to you with confidence and love.”

This is the third Synod over which Pope Francis has presided; the two previous ones were on the Family (one extraordinary and one ordinary synod), and they concluded with the apostolic exhortation, Amoris laetitia (“The Joy of Love”), signed March 19, 2016. 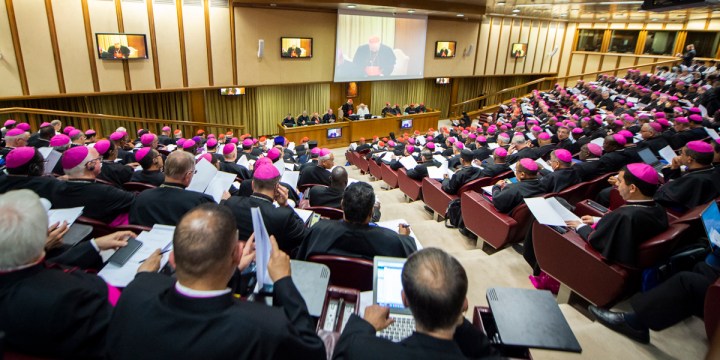