An active faith, lived out in service, is something all Catholics are called to.

At first glance, Lauren Bailey may look like any typical college senior — bright, energetic, and very busy trying to graduate — but when you talk with her, you understand that there is much more beneath the surface. Leader of Xavier University’s Alternative Breaks Program, Lauren has spent most of her college career dedicated to service.

We met Lauren at the Dorothy Day Center for Faith and Justice on Xavier University’s Cincinnati campus, during an information session for the Alternative Breaks Program. In the Pedro Arrupe Overlook, a group of students had gathered to share details on the trips available through the program. The room was very high-energy — these are young people dedicated to social justice and excited about actively living their Catholic values in the world. We spoke with a few students in the Alterative Break program, and all described what they had learned as life changing.

What is an Alternative Break, anyway? Alternative Breaks are trips with a mission — social justice work and service learning. A Jesuit Catholic University, Xavier’s motto is “Men and women for and with others,” and Alternative Breaks are where that motto goes from word to action. Forget lounging on a beach on spring break — these students dig wells; they work with the homeless, the elderly, and those with disabilities; they fight for the rights of immigrants and workers; and they get into the trenches on tough social issues like food security, substance abuse, prison injustice, and civil rights. They build relationships with the people they are serving, and get valuable hands-on experience in the real world. In the true spirit of their patron, Dorothy Day, they learn that the only way to fix a problem is with “love and ever more love.”

Since an eye-opening first Alternative Break trip as a freshman, Lauren then became a trip leader, then board member, and now serves as chair of the program. Her time at Xavier has clearly shaped her as a student, a person, and as a Catholic. She says, “Direct service is beneficial to the population we’re working with, but it’s sometimes more impactful to be with people and build those relationships and try to get to know somebody else’s life. They might be experiencing something that you’ll never have to face, but being able to have a strong relationship, gets rid of that dissonance and disconnection that sometimes lies between people.”

Lauren strives to live Dorothy Day’s words every day. She says, “Love is the one thing that can bring people together unlike anything else. You can’t fear somebody that you love. You can dislike somebody that you love, but you can’t separate that bond. I think that’s something that we really try to connect people with in Alternative Breaks. It’s just the most foundational emotion and aspect of the relationships that we’re trying to foster here, because they are unlikely relationships. A measure of this organization’s success is by the amount of unlikely relationships participants form. And I think the only explanation for a relationship like that is the love that’s present between people.”

She says that Alternative Breaks can “completely change the way you go about living your life and being in the world. I experienced that on my first trip, and every single one since has challenged me in a different way. We have over 200 students in the program every year, and knowing that every single one that goes on a trip has the capacity to come back and have a different perspective and approach their life and career in a different way. They’re well-educated people in the world doing justice now.”

Lauren is passionate about what Xavier University offers students. She says, “There are a lot of things that are offered at Catholic, and especially Jesuit, universities like Xavier that you can’t receive at other institutions. I think it sets a solid foundation for the rest of your life. It’s really special to go to a student Mass on campus and be surrounded by all of your peers and have a homily that’s directed toward students. College is a time when people can fall out of their faith or struggle with it a lot. Having those opportunities and people to talk to is so important.”

Her Catholic faith guides her work. “I have a faith that is connected to justice, and I can’t separate justice from faith,” she explains. It’s not surprising to learn that after graduation she plans to get a master’s in social work and to one day tackle the issue of the death penalty.

An active faith, lived out in service, is something all Catholics are called to. Lauren Bailey and the students of Xavier’s Alternative Breaks program can be examples to all of us in walking that walk. 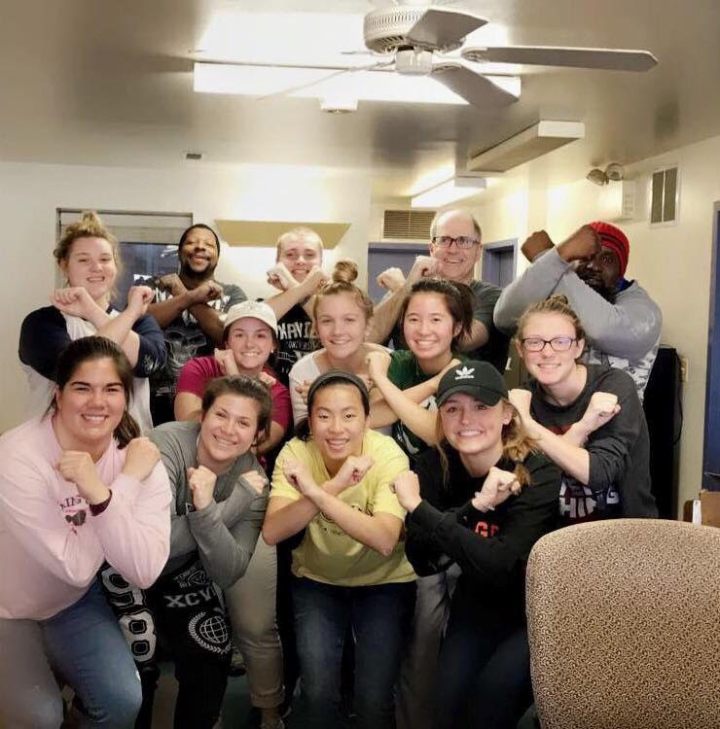 Read more:
The counter-cultural group launched by college students that lit up Twitter