What is that gold container that holds the Blessed Sacrament during Adoration?

Most Catholics know what monstrances are ... even if they don't know the term.

A monstrance is an ornamental container used to hold and display the Blessed Sacrament while it is adored and venerated. The first monstrances date back to the Middle Ages, when the feast of Corpus Christi popularized Eucharistic processions. The need arose for a decorative container to protect the Holy Eucharist from harm as priests and monks carried it through the crowds. The word monstrance literally means “a vessel that exposes”; it comes from the same root as “demonstrate.”

The initial form of the monstrance was a closed ciborium (gold container), which was usually adorned with images depicting the Passion or other passages from the Gospels. Over time the ciborium used in the procession was elongated and included a clear section, called a lunette, containing a single Host.

Today, monstrances have evolved to be highly ornamental, as with the “sunburst” design around the display glass at its center. Aleteia’s own Phil Kosloski describes this best:

The monstrance is meant to highlight and draw attention to the king of kings, Jesus Christ, present in a real and substantial way under the appearances of bread. This is why a monstrance is typically gold and ornamented in a special way, in recognition of the divine mystery it holds and reveals.

View this gallery of photos of beautiful monstrances: 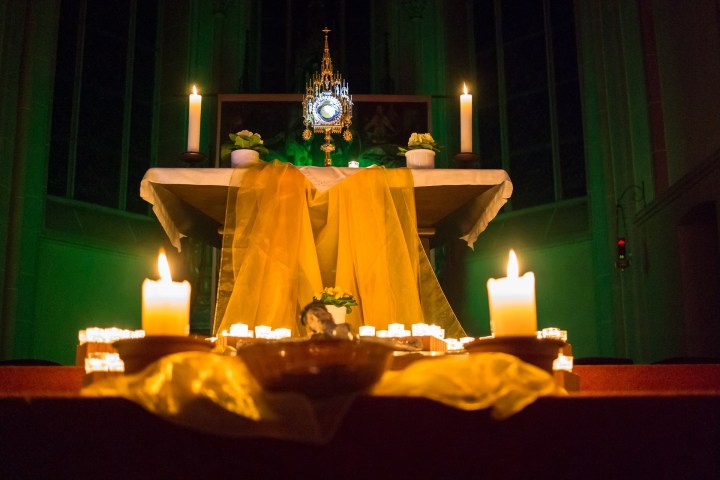