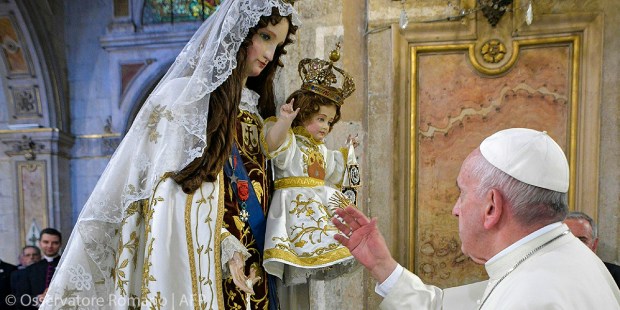 She was a normal woman, he says, like her people and in the midst of her people

“I imagine the Virgin Mary as a normal young woman, a young woman of today, open to getting married, to forming a family,” Pope Francis said in a new interview-book written by Marco Pozza, chaplain of a prison of Padua, Italy. The book, titled Ave Maria (Rizzoli editions & Vatican Bookstore), features the Pontiff explaining the meaning of the prayer of the Hail Mary.

According to the pope, Mary’s daily life was “nothing strange.” She was a “normal” mother: She worked, went to the market, and helped her Son and husband. Therefore, any woman in this world can claim to “be able to imitate her,” he writes in this book, which is due out in Italian on October 9.

Normality, explains the pontiff, is “living in the midst of people and like the people.” On the contrary, it is “abnormal to live without being rooted in a people,” without ties to the people. Under these conditions, a sin is born that “pleases Satan, our enemy”: the sin of the elite. The elite do not know what it means to live among the people. This is not a reference to a social class, he says, but to an “attitude of the soul.”

The Virgin cannot manage to be the “mother of the corrupt” because the corrupt “lock the door from the inside and Mary cannot get in.” They only seek economic, intellectual, and political profit, deplores the pope. “They make a selfish choice, I would even say a Satanic one.” The only prayer for the corrupt, he adds, is for an “earthquake to shake them to the point of convincing them that the world did not begin with them and will not end with them.”

The angel Gabriel does not say to the Virgin that she is “intelligent, full of virtue,” but only that she is full of grace, remarks the head of the Catholic Church. “That is to say, full of beauty, of a free gift.” Beauty “is one of the human dimensions that we too often neglect” in faith, to focus only on truth or goodness. “We must find God in beauty,” he exhorted again.

Read more:
Why beauty will save the world and why that’s good news, even today

Mary was a “rather solitary woman,” continues Pope Francis, because she was alone during the Annunciation and alone at the moment of the death of her Son.

Peter’s Successor also refers to an association of Argentinean mothers whose children were murdered during the military dictatorship between 1976 and 1983. “It’s impossible to understand the pain of a mother who has lost her child.”

“I remained silent and accompanied them,” said the Argentine pope. “We can do nothing but respect their pain, take their hand, but it’s difficult,” says the pontiff.

Read more:
When did Christians start praying the Hail Mary?