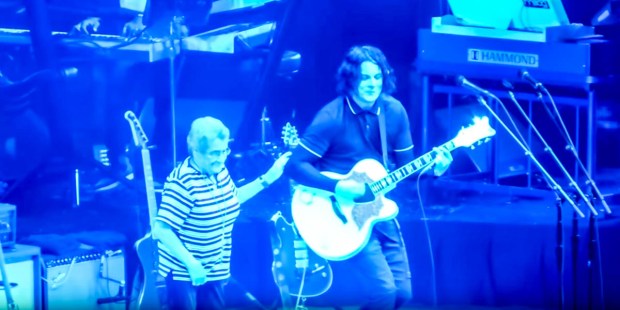 Jack White is in the midst of the European leg of the tour for his new album, Boarding House Reach. Right in the middle of his show in Warsaw, Poland, White invited his mother, Teresa Gillis, on stage to celebrate her 88th birthday. He then led the crowd in a round of the Polish “Sto Lat” (One Hundred Years), which is commonly sung on birthdays and celebrations.

Teresa is the proud mother of 10 children, of which Jack is the youngest, and her family comes from Poland. While rasing Jack and her 6 other sons and 3 daughters, she and her husband Gorman both worked for the Diocese of Detroit. She was the secretary in the Cardinal’s office, while Gorman was the Building Maintenance Superintendent.

Having two parents who worked in the Diocese meant Jack spent a lot of his time in church as a kid. In fact he was an altar boy in 1987 and played his role so well that he landed an uncredited part in the movie The Rosary Murders.

Unfortunately, no one seems to have footage of White’s rendition of “Sto Lat,” but someone did catch a clip of his mother beaming a smile at the crowd and embracing her son before leaving the stage. Jack then settled into the piano for his song “Apple Blossom”.

If you’re interested in hearing what “Sto Lat” sounds like we provided a video below. The tune is most commonly followed by a round of “Niech im gwiazdka pomyślności” (Let them have a star of prosperity). However, this second song is usually left off of kids’ birthday celebrations, since it has references to alcohol consumption. The second song begins about 25 seconds into this video.