The Vincentian Family invites you to its film festival

'Finding Vince 400' is a celebration of the 400th anniversary of St. Vincent de Paul's birth and life mission.

This October 18 will see the inauguration of Finding Vince 400 (FV400), an International Film Festival and competition dedicated to St. Vincent de Paul, focusing on the globalization of charity. The event is being held at the Mariopolis Center in Castel Gandolfo (Rome). 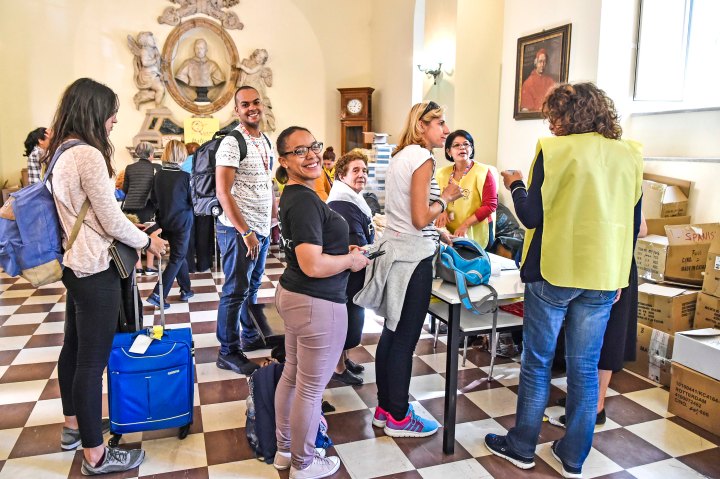 The festival “Finding Vince 400”—officially announced in Rome in 2017 during the Symposium for the 4th centenary of the Vincentian Charism—is a festival during which the subject of the globalization of charity will be explored in all artistic languages in the context of a competition.

Creativity at the service of charity

Creators, narrators, and screenwriters are all called to talk about poverty in a new and original way through diverse forms of artistic expression. The participants in FV400 have committed themselves to try to change the way our society looks at poverty and the new forms of privation that afflict the men and women of today’s world. Thus, they will transmit the charism of the Vincentian Family with the objective of globalizing charity through imagination and creativity.

Finding Vince 400, which will take place from October 18-21, will not only involve cinema: side by side with the projection of full-length features and short films, there will also be conversations with artists on art and the meaning of their activities. The themes of poverty, compassion, and communion with God will infuse every aspect of the Film Festival with the freshness of the Vincentian Charism: for example, there will also be interactive expositions showcasing the creativity of the festival’s participants. Artists, filmmakers, storytellers, photographers, writers, and artists prepared to talk about their vocation will interact with the public.

Many internationally recognized artists have joined this initiative, sending a personal message of adherence and closeness to Finding Vince 400: for example, Clarence Gilyard, known in particular for his roles as Ranger James Trivette in Walker, Texas Ranger and as private investigator Conrad McMasters in Matlock. He is also known for his roles in important films, including Die Hard.Martin Sheen has also expressed his support; throughout his long career, he has earned six Emmy nominations as Best Actor in a television series for his role on West Wing, for which he also won a Golden Globe and two SAG Awards. Sheree J. Wilson, best known for her roles as April Stevens in the soap opera Dallas and as Alexandra “Alex” Cahill-Walker in Walker, Texas Ranger, is also involved.

An eye on the Synod

During the FV400 Film Festival, on Saturday, October 20 in Rome, at the Conciliazione Auditorium, the Vicentian Family will hold an event called “When Charity Calls You,” in collaboration with the Synod of Bishops. It will be an opportunity to reflect through the language of art on charity, God’s love experienced in the poor and in the “least of my people,” which changed St. Vincent de Paul’s life and which still today calls men and women from all around the world to combat new forms of poverty. Jim Caviezel, who played Christ in Mel Gibson’s movie The Passion of the Christ, Piera degli Esposti, Massimo Popolizio, Sarah Maestri and Giovanni Scifoni, Ron and Gen Verde will participate to bear witness to the action of St. Vincent de Paul at the beginning of the 5th century of life of the Vincentian charism, in a story told through images, music, and spectacle, directed by Andrea Chiodi and presented by Arianna Ciampoli. The event is open to the public until the seating is full (for reservations, write to 20ottobre@famvin.org).