An architectural conversation between matter and light.

The Chapel of Notre Dame du Haut (Our Lady of the Heights) is a pilgrimage site in Ronchamp, France. Along with receiving around 80,000 visiting faithful each year — and acting as a veritable feast for the eyes — it is held as one of the finest examples of the Modern architectural style from the catalogue of one of the preeminent Modernist architects, Le Corbusier.

Resting atop a hill and nestled amidst a dense woodland, the site of Notre Dame du Haut can trace its history all the way back to antiquity. The original site is believed to have been a Roman camp, strategically placed to overlook the road to Germania. In the 4th century, as Chistianity spread through the region, a pagan altar was removed and the site was rededicated to the Virgin Mary. 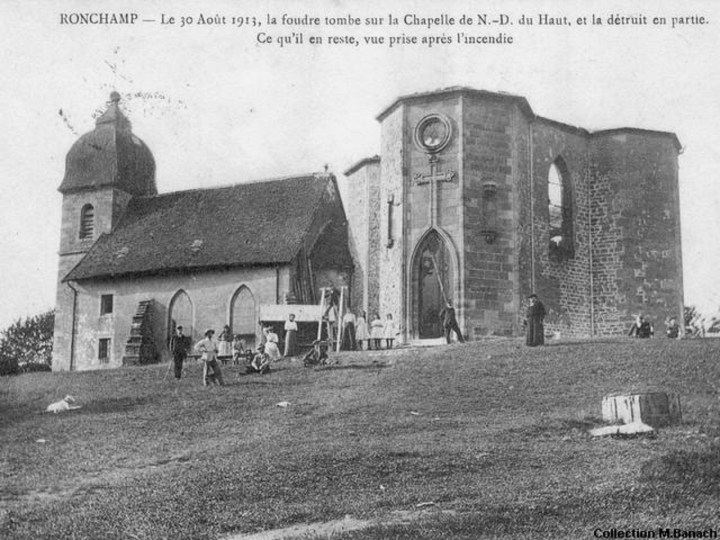 During the Middle Ages the site became the primary worship place for all Christians in Ronchamp and the neighboring villages. However, in the 18th century a new church was built in the center of town and the chapel on top of the hill became a pilgrimage chapel, at which point it adopted the name Notre Dame du Haut.

In the 19th century, the Bishop of Besancon attempted to beautify the chapel in order to increase the number of pilgrims it drew; however, a fire in 1913 halted his efforts. The chapel was barely restored before it took significant damage from aerial bombardment during WWII. It was not until 1950 that an effort was undertaken to rebuild the chapel and for that the people of Ronchamp turned to Le Corbusier.

Le Corbusier, who was not a religious man, was reluctant to take the job, but upon visiting the location, he was drawn in by the beauty of the countryside and the historical value to the community. The entire project took nearly four years to plan and over a year to construct.

Le Corbusier wanted to create a dialogue between matter and light, which is why he employs such unorthodox lighting. Of the project, on the day the chapel opened, he said, “I wanted to create a place of silence, prayer, peace, inner joy.”

One of the most defining traits of Notre Dame du Haut is an enormous raw concrete roof that twists with the unusually shaped walls. The roof is supported by pillars embedded within the walls and rests just above the top of the walls, giving the impression that it is floating. One wall is adorned with oblong and seemingly randomly placed windows, which are filled with tinted glass, so thick that when light hits them they glow like gem stones.