Finding charity in art: the challenge of the Vincentian Festival

On the second day of film projections and debate at “Finding Vince 400” at Castel Gandolfo, many short films were shown. One that stood out was the beautiful “Red de libertad” — “Freedom Network,” in Spanish— by young Spanish director Pablo Moreno, with the talented actress Assumpta Serna in the role of Helena Studler, a sister of the Daughters of Charity during the Nazi occupation of France during World War II. Studler created a network that made it possible to save two thousand people from persecution. It’s a story of freedom and solidarity, a story of love centered on the faith and courage of a consecrated woman who fights for those who cannot fight for themselves.

Through these art films, charity and the Vincentian family — which organized this Festival — embrace each other and show their unity. One question we’ve asked often during these days is, “How can art, and cinema in particular, transmit to others the spirit of charity and love, and make it contagious?”

One of the first people to respond to that question was Pablo Moreno. “Cinema is a fantastic instrument that makes it possible to spread these messages. Cinema is the so-called ‘seventh art,’ in which art and talent come together, respect each other, and can involve a great many people. Cinema can reach so many people! Charity and humility are difficult; they are not visible, so the only way to show them is by telling stories,” he explains. Through cinema, “people can empathize; the spectator can identify with the character and experience what the character experiences.” Does an actor, who needs to know how to identify with someone else, have an advantage when it comes to understanding the difficulties of the people they meet? “An actor needs to know how to listen, and must find inspiration in the people she meets,” replies Assumpta Serna. “I believe in people. My husband says I’m a Christian atheist [she laughs]. I think the world can be better and that that we can fight and commit ourselves to achieve this: we must be honest and exemplary, as the Christian tradition in which I was raised teaches us.”

Young artists at the Festival

From the Philippines came a class of promising artists who accompanied the films with their own paintings. These young people, aged 15-20, express themselves through the plastic arts and have sought to give visual expression to their feelings, their faith, and their hopes for the world.

“All of us have the power to influence those around us. What matters is what we have in our hearts,” says Ludgard. In his work, he has sought to enter into contact with poverty and the poor, asking himself, “Who am I and what do I need? Can I open my arms and my heart?” His inspiration comes precisely from Saint Vincent de Paul and from his charism: helping the poor, being with them, treating them with dignity by giving them “not just money, but understanding and respect—that’s what the poor need.” Richmond, who imagines God’s love as being as great and deep as only the heavens and the sea can be, says his painting is a call “I’ve left unfinished,” he admits. “I don’t know why; perhaps because everything in Creation needs to be completed by us, and this is our vocation, to complete what is only half-done.” There are smiles and laughter, jokes and great happiness for these young people who came from far away to learn and to let their own abilities be known, reflecting on and seeking to discover how best to communicate it with their own talents. 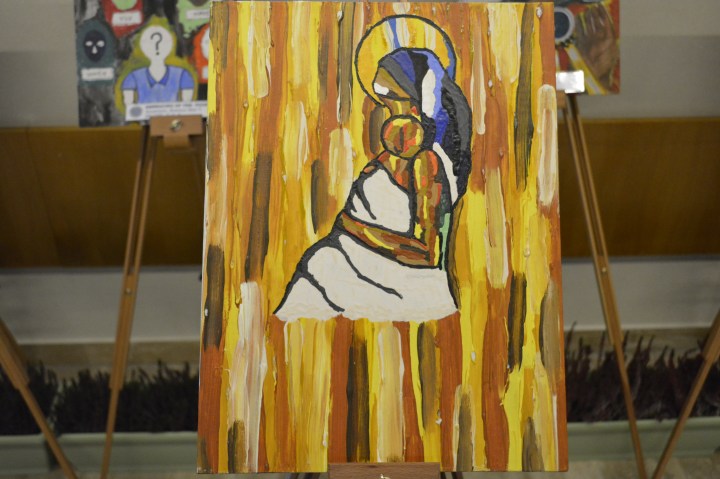