Was this statue of Our Lady made by angels? 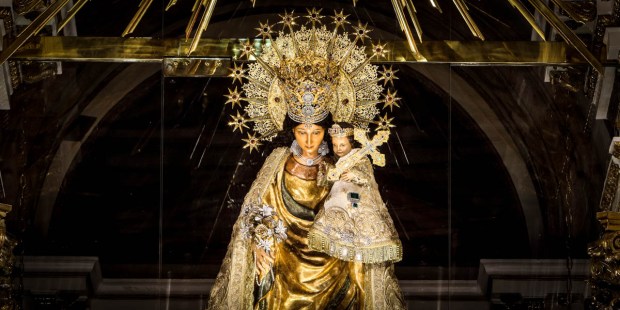 She is the patroness of the city of Valencia, Spain, and the statue dates back to a priest’s desire to help the bullied.

On Friday, February 24, 1409, Father Juan Gilberto-Jofre, a Mercedarian priest, was on his way to the Cathedral of Valencia, Spain, to say Mass. He heard a commotion in the street and saw a man on the ground covering his head with his arms as a gang of young people were taunting and mocking and hitting him.

Father Jofre hurried over to the small crowd and demanded they stop hurting one of God’s children. Father Jofre rescued the man, who suffered from mental illness, and brought him to the Mercedarian monastery where he was given shelter and had his wounds tended to. The following Sunday at Mass, he preached his first homily about the mentally ill.

In the homily, he included a plea for funds to start a place to care for and shelter people afflicted with mental illness. He was so forceful in his words that the merchants, craftsmen, and businessmen at the Mass gave generously. The money became available, and before long a home and hospital were opened dedicated to the Blessed Mother under the title of “Our Lady of Innocents.”

On August 29, 1414, a Brotherhood was founded dedicated to caring for the mentally ill. It was called the Brotherhood of Our Lady of the Insane and the Forsaken Innocents.

A situation arose that resulted in the name soon being changed: A famine had struck the land, and many children had been orphaned. The Brotherhood quickly extended its care to not only the mentally ill but to the many orphaned children wandering the streets of Valencia. They refined the title, and the new dedication was to Our Lady of the Forsaken.

Father Jofre and his brother friars realized the hospital was lacking a prayer room. They built an oratory and when they were finished, knew it was missing something; that something was a statue of their patroness, Our Lady of the Forsaken. Since there was no such statue, they entered into prayer for help in acquiring one.

Legend has it that soon after, three handsome young men knocked on the door seeking refuge. They offered to carve the needed statue as payment for allowing them to stay. They only asked to be left alone to work for at least three days. The friars accepted the offer.

As the three days went by, the three young men remained locked inside the room. The Friars would listen by the door, but no sound was ever heard. At the end of the third day, they again knocked on the door, but there was no answer. Finally, they forced open the door only to find the three men gone. Who were these handsome men? Their identity was never discovered but most folks quickly came to believe they were angels sent by God. Thus began the legend called “Elferen els angels” — “Made by the Angels.”

What the Friars found in the center of the room was a magnificent statue that the men had created. Miracles began to happen, starting with the wife of a member of the Brotherhood. Paralyzed and blind, she was completely cured.

The statue was considered “majestic and protective.” The people saw in the depiction of Our Lady a representation of goodness, mercy, and assistance. In 1885 the statue was named the Virgen de los Desamparados or Our Lady of the Forsaken and declared the Patroness of Valencia.

When all human help fails, it is imperative that we not despair. For normally in this extreme situation, the divine help of Mary comes.

Virgen de Los Desamparados, Our Lady of the Forsaken, please pray for us.