What are the “Leonine Prayers” and why were they created? 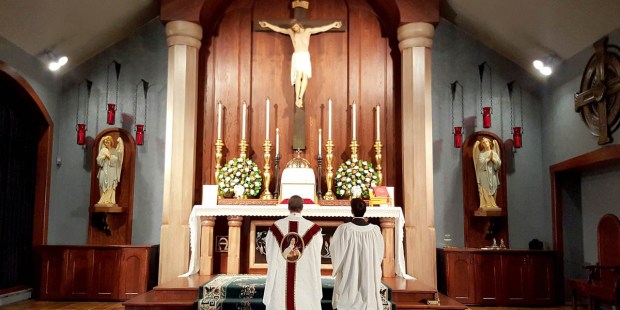 Pope Leo XIII requested these prayers to be said after every Mass for the protection of the Church in a time of crisis.

In 1859, Pope Pius IX, instituted various prayers to be said after Mass, including three Hail Marys and the prayer “Hail Holy Queen.” Initially this was reserved to Italy, as the Papal States were under attack by revolutionary leaders.

By 1870 Rome fell and Pope Pius IX became a “prisoner” in the Vatican, no longer having any temporal land. Thus began many years of tension in Rome, with the pope essentially under self-imposed “house arrest.”

Then in 1884 Pope Leo XIII decreed that these prayers be said by all Catholics after Mass, for the intention of protecting the Church in this crisis, with the hope of an adequate resolution.

Two years later in 1886, Pope Leo XIII added the St. Michael Prayer to these prayers recited after Mass. According to various reports, this was in response to a frightening vision Pope Leo had of “demonic spirits, who were gathering on the Eternal City (Rome).”

These prayers later became known as the “Leonine Prayers,” because of their association with the pontiff.

In 1929, a treaty was signed that resolved the issue of land between Rome and the Vatican, creating the Vatican City State that exists today.

With this problem resolved, Pope Pius XI asked that these prayers should continue to be said, this time for the conversion of Russia. At the time Russia was in a state of turmoil with the rise of Communism, promoting an atheistic state that persecuted religion. This was of great concern for the pope.

In 1964, with the reform of the Roman liturgy, these “Prayers after Mass” were eliminated.

Read more:
Pope asks people of God to unite in 3 specific prayers in October, to protect Church from devil

Below are the official “Leonine Prayers,” which are still recited after Low Masses celebrated in the Extraordinary Form of the Roman Rite.

Hail Mary, full of grace, the Lord is with thee; blessed art thou amongst women, and blessed is the fruit of thy womb, Jesus.
Holy Mary, Mother of God, pray for us sinners, now and at the hour of our death. Amen.
[Said three times]

Hail, Holy Queen, Mother of Mercy, our life, our sweetness, and our hope. To thee to we cry, poor banished children of Eve. To thee do we send up our sighs, mourning and weeping in this valley of tears. Turn then, most gracious advocate, thine eyes of mercy toward us, and after this exile, show unto us the blessed Fruit of thy womb, Jesus. O clement, O loving, O sweet Virgin Mary.

Pray for us, O holy Mother of God. That we may be made worthy of the promises of Christ.

Let us pray.
O God, our refuge and our strength, look down with mercy upon the people who cry to Thee; and by the intercession of the glorious and immaculate Virgin Mary, Mother of God, of Saint Joseph her spouse, of the blessed Apostles Peter and Paul, and of all the saints, in Thy mercy and goodness hear our prayers for the conversion of sinners, and for the liberty and exaltation of the Holy Mother the Church. Through the same Christ Our Lord. Amen.

Saint Michael the Archangel, defend us in battle; be our protection against the wickedness and snares of the devil. May God rebuke him, we humbly pray: and do thou, O Prince of the heavenly host, by the power of God, thrust into hell satan and all the evil spirits who prowl about the world seeking the ruin of souls. Amen.