Built to prove Purgatory exists, the museum's collection includes scorched handprints of those seeking our prayers.

Located on the bank of the River Tiber, not far from the Vatican, is a church that contains a tiny museum with a unique purpose: to convince people that Purgatory exists and that their departed loved ones need their prayers. 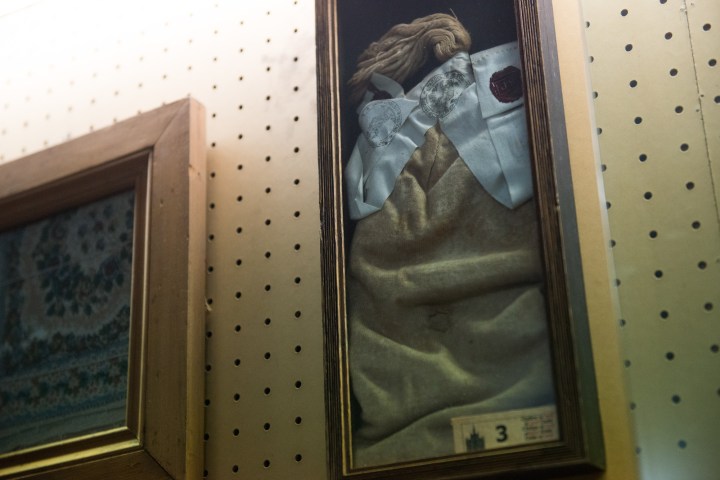 The Museum of the Souls of Purgatory is no ordinary museum. It was created not simply to edify and inspire, but to make a case, just as a prosecutor would make a case before a jury.

Its collection is made up not of sacred art, but of actual physical evidence purporting to prove the existence of Purgatory – namely the tangible marks souls in Purgatory left in order to convince their loved ones to pray for them.

The scorched papers and clothing displayed in the vestry of the Church of the Sacred Heart of Suffrage in Prati testify to the trials of those who managed to avoid going to hell, but sought escape from the purifying fires of Purgatory.

The story of how the church and its museum came about begins in 1897 when a fire broke out in the small chapel that once stood at the same spot. After the fire was put out and the smoke cleared, a Fr. Victor Jouët, who – not incidentally – had a devotion to the souls in Purgatory, noticed that the image of a sad, suffering face was left behind on the wall. Convinced that it was a soul crying out for help, he was from that moment inspired to build a church dedicated to the souls in Purgatory.

According to Fr. Domenico Santangini, the parish priest of the church for the last 14 years, Fr. Jouët accumulated the museum’s collection while traveling to raise funds to build the church.

“Once the money had run out, little by little as the church was being built, he would travel through Europe both to look for money and to look for testimonies that bore evidence of visits from souls in Purgatory, and he brought them all here to Rome. Those that we have in the museum now are authentic,” Fr. Santagini told Aleteia’s Diane Montagna.

Read more:
Purgatory? There’s Actually a Museum for That!

That evidence includes relics that testify to the existence of souls in Purgatory. Besides the original scorched image on the wall of the suffering soul in Purgatory the collection includes:

The scorched imprint of a hand on a desk

A section of wood from the desk belonging to Ven. Mother Isabella Fornari, Abbess of the Poor Clares Monastery of St. Francis in Todi, bears the clear imprint of hand. The mark, which was burned into the desk, was said to be left by the deceased former Abbott, a Father Panzini, of the Benedictine Olivetan Order in Mantua on November 1, 1731, as a message to her that he was suffering in Purgatory.

At the same time, Mother Isabella reported to her confessor, Holy Cross Father Isidoro Gazata, the poor soul placed his hand on her sleeve, burning a hole through it. The desk and the scorched garment are in the museum’s collection.

Handprint on a nightshirt

In 1789, Joseph Leleux heard noises for 11 consecutive nights. Then on June 21, 1789, his mother appeared and reminded him that he was under obligation to have Masses celebrated for her and Joseph’s late father. She then placed her hand on his nightshirt, leaving an imprint. Leleux later converted and founded a congregation of pious lay people.

Handprint on a book

In 1815, Margherite Demmerlé of Metz, France, was visited by her mother-in-law who had died 30 years before. When the mother-in-law asked that she go on a pilgrimage and have two Masses said for her in order to clear her path to Heaven, Margherite asked for a sign that she was truly in Purgatory. An imprint of a hand on the book she was reading was left behind.

Burnt fingerprints on a nightcap

In 1875 Luisa Le Sénèchal, who had died two years earlier, appeared before her husband Luigi in Ducey, France. Asking for his prayers and for Masses to be said in her name, she left the burnt marks of five fingers on his nightcap.

Documents and photos of these and a number of other similar occurrences are displayed in the small museum.

“The charred images we have in the museum represent the fire that burns but purifies. Little by little it burns and purifies the souls who are in purgatory. We see a physical manifestation of this fire, but for the souls in purgatory it is interior,” said Fr. Santangini, curator of the museum.

Today, just as when the museum was first founded, the souls in Purgatory are in need of prayer, said Fr. Santangini.

“The relics in the museum are signs that tell us that we need to believe in Purgatory, that this place of suffering exists, that so many souls pass through it, and also that there are so many souls that are there and forgotten. We need to pray for them.”

Visit the Museum of the Souls of Purgatory in Rome, Lungotevere Prati, 18.

Prayer for the Faithful Departed by Blessed John Henry Newman

O GOD of the Spirits of all flesh, O Jesu, Lover of souls, we recommend unto Thee the souls of all those Thy servants, who have departed with the sign of faith and sleep the sleep of peace. We beseech Thee, O Lord and Savior, that, as in Thy mercy to them Thou became man, so now Thou would hasten the time, and admit them to Thy presence above. Remember, O Lord, that they are Thy creatures, not made by strange gods, but by Thee, the only Living and True God; for there is no other God but Thou, and none that can equal Thy works. Let their souls rejoice in Thy light, and impute not to them their former iniquities, which they committed through the violence of passion, or the corrupt habits of their fallen nature. For, although they have sinned, yet they always firmly believed in the Father, Son, and Holy Ghost; and before they died, they reconciled themselves to Thee by true contrition and the Sacraments of Thy Church.

O Gracious Lord, we beseech Thee, remember not against them the sins of their youth and their ignorance; but according to Thy great mercy, be mindful of them in Thy heavenly glory. May the heavens be opened to them, and the Angels rejoice with them. May the Archangel St Michael conduct them to Thee. May Thy holy Angels come forth to meet them, and carry them to the city of the heavenly Jerusalem. May St Peter, to whom Thou gave the keys of the kingdom of heaven, receive them. May St Paul, the vessel of election, stand by them. May St John, the beloved disciple, who had the revelation of the secrets of heaven, intercede for them. May all the Holy Apostles, who received from Thee the power of binding and loosing, pray for them. May all the Saints and elect of God, who in this world suffered torments for Thy Name, befriend them; that, being freed from the prison beneath, they may be admitted into the glories of that kingdom, where with the Father and the Holy Ghost Thou lives and reigns one God, world without end.

Come to their assistance, all ye Saints of God; gain for them deliverance from their place of punishment; meet them, all ye Angels; receive these holy souls, and present them before the Lord. Eternal rest give to them, O Lord. And may perpetual light shine on them.

May they rest in peace. Amen.