From the Olympics to the convent: The story of Kirstin Holum 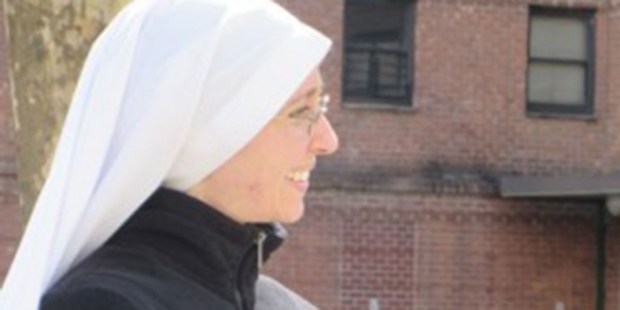 She gave up her skates to don the habit of a Poor Clare sister.

Kirstin Holum was an American speed skater in the Olympic Games of Nagano in 1998. Sister Catherine is a nun of the order of the Franciscan Sisters of the Renewal, who lives and prays in the Convent of Santa Clara, in Leeds, England. Kirstin and Sister Catherine are the same person — but with very different habits.

In an NBC article profiling Sister Catherine and other young Catholic sisters in the UK, Sister Catherine describes her choice as “radical” and “countercultural.” She lives in a convent without an internet connection or television. “We don’t have all those distractions,” Sister Catherine told NBC News, referring to the world of media, social networks, and the internet.

“You are face-to-face with your own weaknesses. I’m grateful that we don’t have those escape hatches. We can really become more free, to love and be who we are meant to be,” she added.

Sister Catherine’s faith comes from her mother, who was also a skater and skating coach. When Kirstin was 16, her mother sent her and a cousin on a pilgrimage to Fatima. There, everything changed for her. She continued competing, but with an eye on “the King of kings.”

From world records to the chapel

Holum went to the 1998 Winter Olympics in Nagano, Japan. There, in the women’s 5,000 meter speed skating event, she set a new junior world record.

At that time, she was 17 years old and had an enviable future in sports. In her short career, she had set eight speed skating records in the United States and six junior world records.

But God has unfathomable ways, and Kirstin, surprising her family and friends, decided to “hang up” her skates. Instead of continuing on in another Olympic sport after finishing her university studies, she became a postulant in the community of the Franciscan Sisters of the Renewal in the Bronx (New York).

When she was competing, she would train for four hours a day. Now, in the religious life, she spends hours a day in prayer. Does she have any regrets for having left the world of competitive speed skating behind? No, she says.

“The excitement and the joy of competing and doing well, even just doing your personal best, there’s a great thrill in that,” Sister Catherine told NBC. “But it was always a fleeting joy … ”

“I think deep down, everyone is desiring to be great and to do something great. It’s only when you get really in touch with God’s plan for you that you really find a peace in doing the great thing, whatever it might be.”

Six years after becoming a religious sister, Sister Catherine was among a group of Franciscan sisters sent to England with the mission of opening a new convent at the invitation of the Bishop of Leeds.

The United Kingdom, once a stronghold of Christianity, has become one of the least religious countries in the world. According to a 2017 Gallup poll, approximately 70 percent of the population self-identifies as nonreligious or atheist.

Nonetheless, the region is experiencing something of a resurgence of the faith. The number of Catholic nuns has increased since it hit its lowest point in recent history in 2004.

This upsurge is due at least in part to younger generations: while only 20 percent of Catholics aged 45 to 64 say they go to Mass weekly, the percentage rises to 25 percent among those aged 25 to 34.

Sister Catherine hopes to be one of God’s instruments in the New Evangelization, bringing the joy of the faith back where it has been lost.

Read more:
These Brazilian nuns and friars came to LA to feed the homeless