Up until the 4th century, when Emperor Constantine legalized Christianity, Christians were banned from practicing their religion in Rome and often restored to secret meetings in catacombs to remember and pray for their dead. Between the 1st and 4th centuries, Christians used or built approximately 40 of these underground burial sites located outside the city walls. 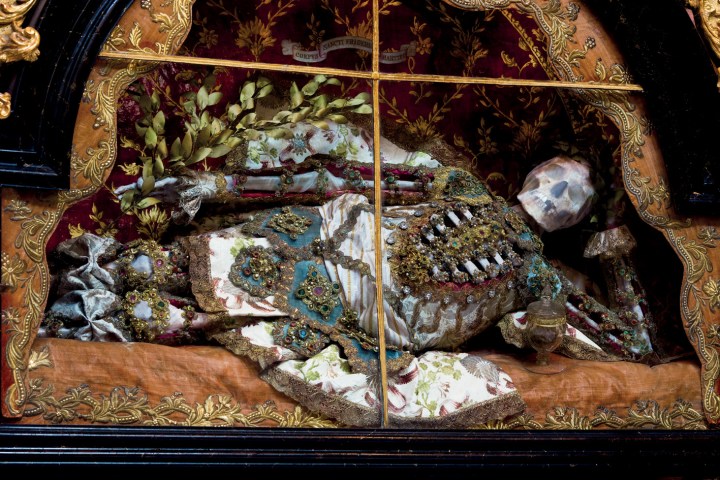 During the 16th century, some of these ancient underground tunnels started to be excavated and their relics exhumed. Many of the human remains found inside catacombs were attributed to martyrs who died from persecution back when Christianity was illegal. Over the next two centuries, many of these early Christian remains were sent to northern Europe, where Catholics were facing oppression by the newly founded Protestant movement, including the destruction of relics. The arrival of remains of early Christians was met with such enthusiasm that monks and nuns decided to adorn the “holy bones” with  fine fabrics, gold and precious stones.

The end result is an enchanting yet spooky collection of “bejeweled holy relics” scattered around churches and monasteries in modern-day Germany, Austria and Switzerland. In 2008, art historian and photographer Paul Koudounarisstumbled upon one such spooky relic as he was visiting a German village near the border with the Czech Republic. A few days later, Koudounaris stumbled on two other “bejeweled remains” preserved in another small church in the area. He soon realized that that those magnificently decorated skeletons were actually “a thing” and spent the next few years exploring German, Austrian and Swiss churches to document this peculiar cultural phenomenon. His findings are presented in the beautifully illustrated book Heavenly Bodies: Cult Treasures & Spectacular Saints from the Catacombs, published by Thames and Hudson (2013).

As Koudounaris explains in the introductory chapter, relics were dressed with luxurious garments and jewels to reproduce the Heavenly Jerusalem described in Chapter 21 of the Revelation: “a divine place constructed of gold and precious stones.” That description was indeed taken quite literally by the monks and nuns that turned the “catacomb remains” into what Koudounaris defines as “the finest pieces of art ever created in human bone.”

It’s difficult to estimate exactly how many of these opulent skeletons were created during the 15th and 16th centuries, but Koudounaris estimates that the Church sent at least 2,000 full skeletons out to Germany, Austria and Switzerland. The largest group of catacomb skeletons was collected by Waldsassen Basilica, which Koudounaris defines as the the “Sistine Chapel of Death,” due to its impressive collection of 10 fully-preserved catacomb remains. What’s sure is that virtually every Catholic church, especially in southern Germany, would proudly display a beautifully decorated skeleton to make a  “grandiose statement” against the Protestant oppression. And the holy relics soon became a crucial part of popular culture, too. Locals would often pray to those ancient martyrs for help and many families started to name their children after their local “catacomb martyr.”

But their fortune did not last too long. In the 18th century, Austria’s Emperor Joseph II, a Catholic with a strong interest in Enlightenment principles, started to review a lot of “unenlightened” practices. He ordered the suppression of 700 monasteries that were not involved in the provision of services like education and nursing, and the destruction of relics that could not be accurately documented as authentic. A few relics were spared as they had been donated to church and monasteries by Joseph’s mother, Empress Maria Theresa, as a symbol of devotion, including one in the Benedictine monastery of Melk in 1762.

The few skeletons that survived Joseph’s edict were actively humbled down. In Amberg, Germany, the skeleton of Saint Crescentius was removed from his shrine and locked into a box at the bottom of the altar. And during the 20th century, it was petty thieves who further contributed to such humbling by breaking into churches and stealing whatever valuables they could lay their hands on.

So today we are left with a much less extensive collection of bejeweled remains. But thanks to Koudounaris, those that managed to survive are now catalogued for everyone to see. View the gallery above to see the most striking examples of “bone art” documented by Koudounaris in his book.