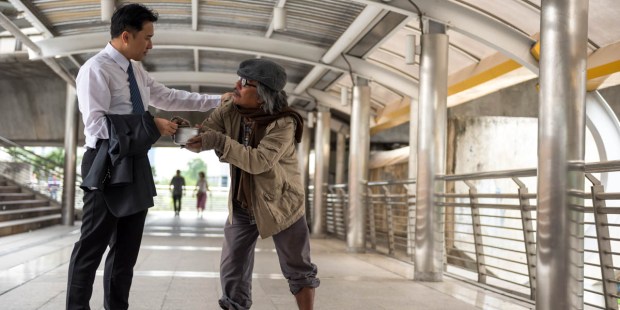 Between them, we would think, you would find no connection. They lived in worlds nearly as far apart as an astronaut on the space station and a tribesman in the Amazonian rain forest. And yet Fr. Ronald Knox, who was one of those Englishmen, and St. Pio of Petrelcina, who was one of those Italians, were united in a love of God and of holiness so deep that Englishman could admire that Italian as a living saint.

I have known some Englishmen of the type who sat slouched in an overstuffed leather chair at their (exclusive) club holding a very old (and expensive) scotch quoting Shakespeare. They did not, let me say, particularly admire sanctity, and they definitely did not think highly of Italian peasants.

But preaching on All Saints’ Day in 1950 at a Catholic boys’ school, Fr. Knox held him up to the boys as a living example of sanctity. (You can find the sermon in his collection called The Pastoral Sermons of Ronald A. Knox.) Don’t think that the saints all lived a long time ago, he says. “No, there are people alive at this moment who do just the sort of things the saints have always done.” He points to Padre Pio.

“He only sleeps about three hours every night and spends nearly all day hearing confessions,” Knox says. “When he says Mass it takes him nearly two hours to get through it, because he gets so overcome with devotion that he can’t go on.”

“You might think that would make people want to go on to some other Mass, but no, they all crowd to Padre Pio’s. He says it at four o’clock in the morning, and at four o’clock every morning there’s a queue outside the church waiting to fight their way in and hear Padre Pio’s Mass, because they know what a holy man he is.”

Knox himself was a Catholic celebrity and would have had some people show up at Mass just to hear him, but not long crowds at four in the morning. He knew a testimony to holiness when he saw it.

One of the boys to whom he was preaching had a brother and several more a cousin who’d just gone to Petrelcina, he continues. “Just imagine how holy a priest must be, to make one’s brother want to get up at four in the morning and hear his Mass! And Padre Pio is just as alive as you or me.”

What made Ronald Knox the kind of man who’d admire Padre Pio? Such feeling doesn’t seem likely, given his background. Knox had grown up Protestant, the son of a bishop, someone at the top of the religious establishment. His father the bishop would most definitely have disapproved of Padre Pio.

He went to the school to which the king’s sons went and then to Oxford, and he moved comfortably among people with “Lord” before their name. Even the serious Christians in the circles of his upbringing thought of Catholicism as something not quite the thing, as the church for Irish maids and Italian waiters. It was, they would have thought, the church of people who cared more for Mary than for Jesus, who loved garish statues and weird devotions like the Sacred Heart, and offered prayers like the rosary superstitiously.

But there stands Ronald Knox, child of that world, in what must have been a posh school, pointing the boys to a Italian priest as a living example of someone who does the sort of things the saints have always done. How’d that happen? The reason, I think, is that Ronald Knox was a Christian, and more to the point a Catholic. (As were the boys.)

One thing the Church teaches is that our loving Father gives us saints everywhere, and that the lowliest person in the world’s eyes may be someone to whom we owe reverence, someone so like Jesus we aren’t worthy to untie his shoes. She cracks our prejudices.

The Catholic Church forces us, through her calendar and devotions, and especially through the feast of All Saints, to see saints everywhere. Especially in places we, prejudiced as we are, wouldn’t think to look. The Church teaches us that all men and women are our brothers and sisters, and some of them are — in the great mercy of God — our superiors, our saints.