Christian persecution on the rise as 7 are martyred in Egypt 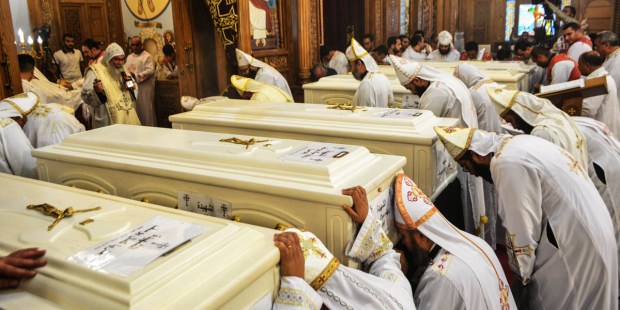 We have witnessed an uptick in persecution of Christians in the Muslim world in the last week. On Friday, November 2, the Church gained seven new martyrs when militants affiliated with the Islamic State, or ISIS, attacked a bus filled with Coptic pilgrims in Minya, Egypt, on their way to a local monastery.

Coming on the heels of the acquittal of Pakistani Christian Asia Bibi — a decision met with angry protests across Muslim-majority Pakistan — and the assassination of a prominent Muslim cleric, these events could trigger more persecution of Christians in the near future.

Buses full of Coptic Christians were headed for the Monastery of St. Samuel the Confessor in Minya when ISIS-affiliated militants attacked. Between seven and 19 others were wounded, including some children. The Copts, in spite of this persecution, displayed a remarkable degree of charity towards their persecutors. Rad Noseer Mitri, priest of Mar Girgis Church, told reporters: “We would like to tell them [the attackers] that we still love them despite what happened. We have a question though — why are you doing this to us? We do not commit malice towards anyone.”

This is only the latest of a long history of Islamist violence against Egypt’s Coptic community, which makes up about 10 percent of the country’s population. In May 2017 ISIS also claimed responsibility for an attack on another bus carrying Christians to the same monastery that resulted in the deaths of at least 28 people.

Christians are also at risk in Pakistan, where Asia Bibi, a Christian woman accused of blasphemy, was acquitted by the Supreme Court of Pakistan on October 31, because of “material contradictions and inconsistent statements of the witnesses.” Bibi, also known as Aasiya Noreen, was accused of blasphemy in June 2009 after an argument with Muslim coworkers while harvesting berries — her accusers refused to drink from a bucket of water Bibi had touched because she was Christian.

Bibi’s acquittal elicited strong condemnations across Pakistan, including violent demonstrations by extremist Islamist group Tehreek-e-Labbaik Pakistan (TLP). TLP has already made an agreement with the Pakistan Government that Bibi be prohibited from leaving the country. They are also renewing demands that Bibi — who remains in a prison that has been converted into a safe house — be executed for her alleged blasphemy. Among the extremist Muslim leaders opposed to Bibi’s exoneration was Pakistani cleric Maulana Sami ul-Haq, known as the Father of the Taliban, who was assassinated on November 2 by unknown assailants. Thousands of the cleric’s followers attended a November 3 funeral in his honor. Incendiary comments by members of Haq’s party pinning his murder on “enemies of Islam” leave Christians in fear of reprisals.

I have a long history of working with persecuted Pakistani Christians. For three years I lived in Bangkok, Thailand, where I discovered a large Pakistani asylum seeker and refugee community who had fled their homeland for fear of persecution or death. One devout Catholic family of 17 members was attacked on multiple occasions before they escaped the country — a husband and wife were shot at by Muslim extremists, while two young female members of the family were captured and set on fire by a Muslim mob. Another family of five was threatened at gunpoint, the father warned that if he did not convert to Islam they would kill him and marry off his wife and teenage daughter. After illegally living in Thailand for several years, they were forced to return home to Karachi, Pakistan, by the Thai government. My wife and I helped pay for the father to buy a motorized rickshaw to earn a living — Islamist extremists recognized him, beat him nearly to death, and burned his rickshaw. A GoFundMe campaign organized by my wife — and funded by the generosity of family, friends, and strangers — paid for that family’s medical bills.

Both of those Pakistani Catholic families have contacted me since the Asia Bibi ruling and the assassination of Maulana Sami ul-Haq. One sent a number of videos that showed extremist Muslim clerics in Pakistan condemning the decision and calling on Pakistani Muslims to avenge this insult to their faith. The other Catholic friend wrote to us from Karachi explaining that the situation for Pakistani Christians was “very bad” and that some Muslims were grabbing passerby on the streets and asking them if they were Christians. In Karachi there is a large community of Pashtuns, the same ethnicity that is the predominant force in the Taliban.

These events do not bode well for Christians in the Muslim world. In the last week we witnessed seven new martyrs worthy of our honor — and requests for intercession. Given the threats of retributive attacks against Christians in Pakistan, we may very well have more in the coming weeks. The universal Church must once more commit itself to prayers and supplications for the sake of our brave brethren in Egypt, Pakistan, and across the Middle East.