Israel plans to construct a cable car in Jerusalem 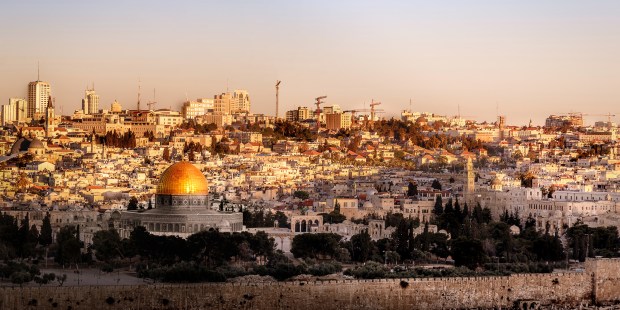 The project has been criticized as a detriment to the ancient aesthetic.

Jerusalem’s Old City is one of the most popular tourist attractions in Israel, recieving nearly 3.5 million tourists annually. Because of this increase in foot traffic and tour buses, especially during holiday seasons, the ancient narrow streets routinely become congested and are infamous for their gridlock.

Now, in order to make the city more tourist friendy and faster to travel, the Israeli government has announced a plan to install a cable car.

CityLab reports the path that this new source of public transportation would take:

The cable cars would begin at a light rail stop on the west side near the First Station cultural center, then fly by Abu Tor, the historic Hinnoam Valley, and Old City Walls, stop at Mt. Zion, and end atop the Dung Gate (the least-poetically named of Jerusalem’s eight historic gates) in the Palestinian neighborhood of Silwan. The scheme would ferry up to 3,000 people hourly and primarily serve those visiting what Jews refer to as the Western Wall and City of David.

The authorities contend that the cable car would be an environmentally friendly solution for the over crowded streets, but Moshe Safdie, one of Israel’s premier architects, disagrees. Safdie told CityLab that the cable car would only see the traffic relocated further into the city. He also believes the archaeological significance of Jerusalem precludes such a drastic alteration to the aesthetics of the city:

“My main objection, even if it was a magical solution [to traffic], which it is not, is that it would be a terrible visual affront to the old city,” said Safdie. “There are cable cars all over the place, but [they are] not flying over Florence or Cordova, or any other historic city.”

Further objections have been raised by Palestinian residents who claim they have not been consulted about the project, and feel marginalized. The cable car would terminate in a largely Palestinian neighborhood, called Silwan, where a tourist center would also be constructed by the City of David Foundation. In order for construction to commence, the Israeli government would need to buy up this Palestinian land and displace its people.

The Israeli and municipality governments are in favor of the cable car and are working to fast-track the plans. In May, they announced a $55.2 million budget for the project. The Tourism Ministry highlighted the benefits of a cable car in a recent press release:

“The cable car will provide transportation and environmental solutions, and it will make the Old City accessible for people with disabilities … On holidays for the three monotheistic religions, between tens and hundreds of thousands of people visit the Old City. Today, vehicle access for non-residents is prohibited in most parts of the Old City and, therefore, the cable car is defined as a project of great importance to tourism in Jerusalem.”