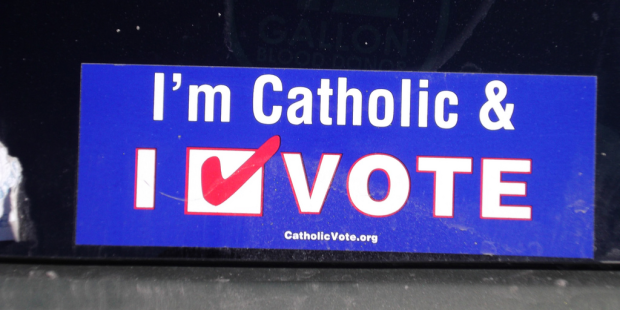 Though divided, Catholics remain a driving force in US elections.

The numbers from the 2018 midterm elections are in, aside from a few states which are still in contention, and it would seem the Catholic vote is split down the middle between the two main parties.

According to a poll by Pew Research Center, 50% of Catholics voted for Democratic candidates and 49% cast their ballots for Republicans. The results, CNA notes, are much closer than in previous midterm elections.

In the 2014 midterms 54% of the Catholic voting pool chose GOP candidates, leaving just 45% in support of the Dems. CNA notes that the two elections previous to that also saw a gap of about 10 points between the parties:

In recent years, Catholics have been unique among religious or faith-based demographics, in that they do not routinely support just one party. Evangelical Christians, for example, have cast about 75% of their votes to the Republican party for the last three midterm elections. It was this voting pool which also helped pass pro-life amendments in several states.

The topic of abortion influenced more than just proposition votes, as it appears the voters chose their candidates largely based on their views of abortion. In Indiana, Democrat incumbent Joe Donnelly was ousted by Republican, Mike Braun. During his campaign, Braun repeatedly cited Donnelly’s voting record on abortion.

North Dakota is another example of this, as Senator Heidi Heitkamp lost to her pro-life opponent, Kevin Cramer. Heitkamp ran for office six years ago in opposition to government-funded late-term abortions, yet cast 100% of such votes in favor of Planned Parenthood supported measures.

Speaking to CNA, Jeanne Mancini, President of March for Life, was pleased with the addition of more pro-lifers to the Senate, but felt concern over the change in the House of Representatives:

“Now that Democrats control the House, we can expect the Committee Leadership to fall in line with the pro-abortion lobby, pushing an extremist agenda that undoubtedly includes undoing all the pro-life progress made by this administration.”