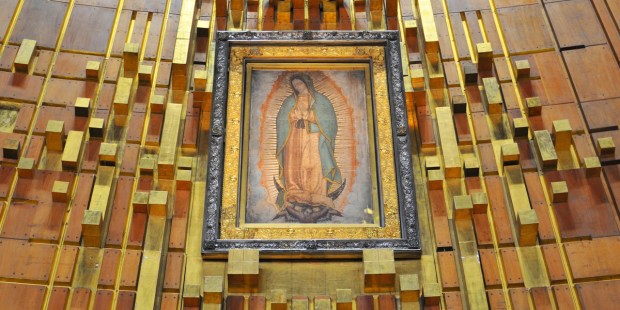 Now you can make a pilgrim’s prayer at the Basilica of Guadalupe from the comfort of your home.

For millions of Catholic faithful, a pilgrimage to the Basilica of Our Lady of Guadalupe is an annual tradition. Each year, the shrine in Mexico City receives around 20 million visitors, some of whom have traveled for days on foot to request intercession from the Blessed Virgin. But many thousands more have their prayers delivered without ever stepping foot in the shrine’s hallowed halls.

New York Magazine reports that since 2001, the Basilica’s official webpage has offered a portal through which prayers can be submitted digitally. Each day the manager of the website, Ricardo Galindo Melchor, finds 350 to 450 new prayers in his inbox — a number that spikes nearing Catholic holidays — and downloads them onto a flash drive, which is placed into a small wooden box installed at the foot of the image of Mary.

The prayers are left for the Blessed Mother’s consideration for 15 days before the drive is wiped clean and filled with fresh prayers. Malchor never reads the prayers out of respect for the petitioner’s privacy.

In the 17 years that the Basilica has offered this service they’ve had to make several adjustments to the process. At its inception, Melchor printed out each prayer on a separate page. This practice was dropped due to the massive amount of paper needed, on which Melchor commented, “Sheets and sheets and sheets and sheets.”

For a few years they would burn CDs full of prayers, and melt them once the disks were removed from the box. Now, thanks to advances in USB technology, Melchor can fit tens of thousands of prayers on one little reusable drive.

Father Andrés Enrique Sánchez Ramírez, one of the many priests of the Basilica of Guadalupe, says that while the practice may seem strange to some, it was endorsed by Pope St. John Paul II:

“[JPII] saw how the people come to Guadalupe, and he wanted her to be able to come to them as well. It demonstrates the extent of the presence of the Virgin; just like the Basilica, with its doors always open, anyone can be near to her.”

The evolution of technology allows for a digital pilgrimage, but for pilgrims like Rodolfo and Noel there is no competition to the real thing. The two pilgrims had walked for four days from Temascalcingo, a town in the state of Mexico, in order to reach the Basilica. They believe that the journey to the Basilica was an essential part of the pilgrimage:

“It’s a question of faith,” says Rodolfo. “Walking is a kind of penitence; it allows you to reflect on your daily life and what you need to change.”

“By the end, you feel like you can’t take anymore, but faith motivates you to keep going,” adds Noel.

Rodolfo and Noel were not alone in their opinion, as others outside the Basilica scoffed at the idea of emailing prayers. Melchor, however, disagrees with this sentiment, commenting, “She won’t love you more because you make more of an effort.”

Father Ramírez considers the practice of emailing prayers to be akin to lighting a votive candle:

“There’s a spiritual, psychological, natural, anthropological need to express, to leave something permanent, to make manifest.” He continued, “Think about a mother and son. He has to migrate, and he takes with him his mother’s photo. The photo serves to remind him of her, to maintain their love. But it will never invalidate his return home, his need for a mother’s embrace, her kiss. What you begin online when you write to the Virgin, you complete here in the sanctuary.”