Was St. Brendan the first to celebrate a thanksgiving Mass in America? 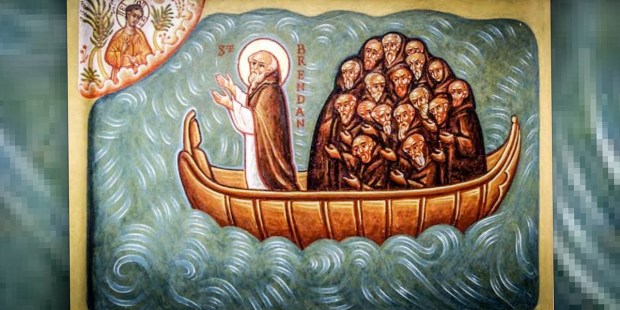 And were the Irish the first to bring Christianity to South Carolina?

The Vikings are generally regarded by historians as the first European explorers to set foot on American soil, but there is a fascinating possibility that Irish Christians arrived there first.

There is a story from Ireland about a monk who was an expert sailor and traveled all over Ireland as well as Scotland, Wales, Brittany and France. His name was Brendan and he was born around 484 in southern Ireland. He had a great desire to bring more souls to God and took quite literally the commission of Jesus to “Go into all the world and preach the gospel to the whole creation” (Mark 16:15).

He heard rumors of a distant land in the West, which some believed was the original Garden of Eden. Taking a small crew, Brendan set out around the year 545 on a small round-bottom boat called a currach that was sealed with leather and had a square sail. An 8th-century account of the journey was recorded in The Voyage of St. Brendan, and it describes various stops along the way that appear to correspond to places such as the Faroe Islands, Iceland, and Greenland, and even describes icebergs.

The possibility of such a feat was researched in 1976 by historian Tim Severin, who crafted an identical boat from the description given and took along with him a few companions. He made stops similar to those he believed St. Brendan could have made and eventually reached Peckford Island, Newfoundland. Severin’s research proved that a cross-Atlantic voyage was possible during the 6th century using primitive technology.

The story of Brendan’s voyage was a popular one and Christopher Columbus was well aware of the legends. If the journey was true, Brendan would have likely celebrated a thanksgiving Mass on American soil, as he celebrated Mass at each location he reached, even celebrating Mass on the back of a large fish.

What makes this even more interesting is the recent evidence of Irish influence in South Carolina that predates Columbus. According to Irish Central, recently “Researchers began to investigate the similarity of Irish rock carvings to those in the state of South Carolina.”

Furthermore, a Spanish historian in the 16th century described a neighboring colony in the Americas as the “Duhare,” and “The Duhare words, recorded by the Spanish, were able to be translated using Gaelic dictionaries. Duhare, in fact, was found to be translated to either ‘place of the Clan Hare,’ or if the Duhare came from west of the Shannon River, it meant, ‘du’hEir,’ place of the Irish.”

Recently, a professor emeritus from Harvard University claimed he found “Christian messages in old Irish script” carved on a rock in the area.

Furthermore, the Catholic Encyclopedia states that several scholars believe the Irish were the first to set foot on American soil, because of “the account of the Northmen who found a region south of Vinland and the Chesapeake Bay called ‘Hvitramamaland’ (Land of the White Men) or ‘Irland ed mikla’ (Greater Ireland), and on the tradition of the Shawano (Shawnee) Indians that in earlier times Florida was inhabited by a white tribe which had iron implements.”

Some historians even claim, “Documents from the 12th, 13th, 17th and 18th centuries [might] describe voyages of persecuted Irish Christian sailing across the Atlantic to Witmannsland (White Mans Land in Norse).”

Currently there is no definitive evidence for any of the above claims, but if proven, these theories could help explains some of these ancient legends. The Voyage of St. Brendan may seem mythical to the modern reader, but to the medieval mind, there was truth hidden within it.

Time will tell if the Irish were the first to bring Christianity to the Americas.

Read more:
The first Thanksgiving in America was a Catholic Mass