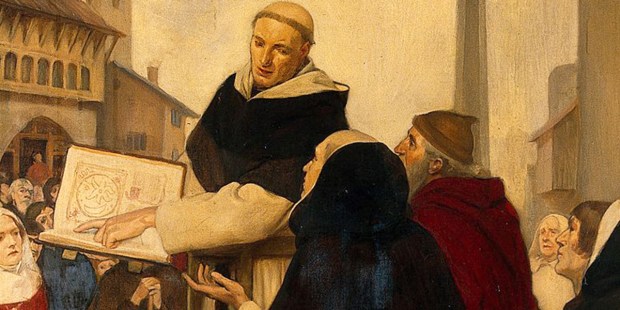 Recently, the International Astronomical Union announced it would officially rename a key idea in astrophysics to honor one of the people instrumental in its discovery. Hubble’s Law describes the effects we can observe that tell us the universe is expanding, which is a crucial piece of evidence to support the “Big Bang Theory” that the universe had a beginning. And while Edwin Hubble first set down the equations describing this effect, the theory itself was first proposed by Georges Lemaitre, a Belgian scientist … and a Catholic priest.

If you’re shocked to discover that the Big Bang Theory was originated by a Catholic cleric, you might also be surprised to learn that the science of genetics was basically invented by a Catholic monk, Gregor Mendel, or that the modern science of geology was founded by a priest, Nicholas Steno. Contrary to a common misconception, the Catholic Church has a rich history of scientists and “natural philosophers” who studied God’s creation systematically as a way to come to better know its Creator. Perhaps none is more important or influential than today’s saint.

St. Albert the Great was born in 1193 in Bavaria in modern-day Germany. Attracted to learning at a time when the first universities were beginning and blooming in Europe, Albert studied the works of Aristotle in Padua before entering the Order of Preachers, the Dominicans, and becoming a priest. He studied theology in Bologna and was soon himself an instructor, teaching at universities throughout Germany and eventually settling at the University of Paris. Among his students at that time was a young friar who was mocked by the other students as a “dumb ox” for his large size and quiet manner. Albert recognized the friar was actually a genius, and told his class that this “ox” would soon bellow so that the whole world would hear—and the world certainly did hear from that student: St. Thomas Aquinas.

As a renowned teacher and a leader in the Dominican order, Albert had a hand in molding the course of studies that Dominican friars would undertake, especially in introducing philosophy into their regular course of studies—which included the “natural philosophy” or scientific principles of Aristotle and others. This ratio studiorum would become influential throughout the rest of the Church.

Albert himself was one of the greatest scientists of the medieval period. He had an almost encyclopedic knowledge of a range of physical sciences, from physics to biology to astronomy, and his own investigations demonstrated an early use of a form of the scientific method that would become more formalized a few hundred years later. He wrote treatises on general topics such as minerals, plants, and animals, as well as detailed studies on the heavenly bodies and early forms of chemistry (often mistakenly identified as attempts at alchemy).

In 1260 the pope named Albert as bishop of Regensburg. He served in his new role with humility, famously refusing to ride a horse and walking everywhere. He helped to found the oldest university in Germany, the University of Cologne, and defended the orthodoxy of his pupil Thomas after his untimely death.

Read more:
Bishop Barron takes on the myth that faith and science are enemies

St. Albert’s life and writings demonstrate that a common view of the medieval world is incorrect. To many, that faith-dominated age was an incurious and superstitious one in which people neither knew much about the world nor desired to; the answer to all questions was, “God did it,” and people were discouraged from investigating the world for fear of contravening religious orthodoxy. On the contrary, we see in St. Albert a beautiful blend of faith and reason, a mind that sought to find the causes of things, knowing that God in making His creatures had given them their own agency, their own way of acting and making things happen—and to learn about these causes was to come to know something of the mind of God.

St. Albert saw that God gave all things their own way of causing, but that everything ultimately comes from God. As he wrote, “In studying nature we have not to inquire how God the Creator may, as He freely wills, use His creatures to work miracles and thereby show forth His power; we have rather to inquire what Nature with its immanent causes can naturally bring to pass.”

Fr. Georges Lemaitre’s contemporaries accused him of using the Big Bang Theory to try to “sneak God” into science, by asserting that the world had a beginning (when “everyone knew” at that time that the universe was an eternal, steady state). If only they’d known figures like St. Albert the Great, they would have known better than to make such a foolish claim.

Read more:
Love of science can be a “foretaste” of divine love, says Pope Francis