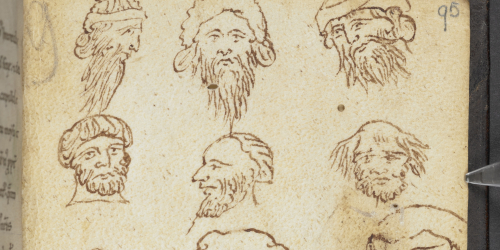 In a time when beards were out of favor, one order’s lay brothers took a stand.

We are knee-deep into No-Shave-November, and while the whiskers are starting to look scruffy, it may be pertinent to note that there was a time when beards were not the popular face-warmers they are today. In the Middle Ages the practice of clergymen growing glorious soup catchers was hotly debated, and by the 12th century, canon law required all Western clerics to go clean-shaven.

The general thought at the time was that a clean-shaven face was associated with the purity and humility of angels. Soon after the edict, a baby-smooth chin became one of the most quickly recognizable traits for men of the cloth. Laymen were still allowed to grow beards, but this further marked them apart from the clergy.

While the makers of straight razors were most likely thrilled with the new fashion, there were some who were too attached to their beards to let them go. In the 1160s, the abbot Burchard, of the French Cistercian abbey of Bellevaux near Besançon, received a letter from the community at Rosières, a neighboring house of the same Order. The letter condemned the lay brothers at Cistercian abbey for growing their beards.

The Cistercian lay brothers were men who joined the order but did not participate in monastic life. They helped the monks run the abbey, but they did not take the same vows, they lived in separate areas and maintained very different lifestyles. Burchard took umbrage at the chastising missive and wrote them back a letter in three chapters, entitled Apologia de Barbis (In defense of beards).

In a style that would make modern hipsters swoon, Burchard refers to the subject as barbilogia (“beardology”) and, in a particularly rebellious manner, to himself as barbilogus (“barbilogist”), or the expert on beards. His letter not only speaks of the different types of beards and the value of each, but he also encouraged the monks at Rosières to grow some of their own.

The British Library notes some of the different beards listed by the barbilogus:

Burchard mentioned more than 10 styles of beard, including one “urban” (urbana figuratio) and one military, which, he added, does not go well with long hair. There was the beard that covers the chin (barba mentanea), that from under the chin (submentanea), and the side beard (barba maxillaris). We are told that long sideburns and the beard under the chin make the face resemble a goat, while moustaches reaching to the ears resemble a wild boar. There is inequality between men according to their beards: there are those with precocious beards (citiberbes), those with late-developed beards (tardiberbes), those whose beards are thin and wispy (rariberbes), and those with even, bushy beards (pleniberbes).

Burchard went on to claim that a beard maintains an important link between a man’s physical and spiritual life. He believed that a beard could save a man’s life or it could mean his damnation. Burchard further suggested that one of the punishments of Hell would be to have one’s beard burned off.

According to the barbilogus, there was nothing to fear from an appropriate, well-groomed beard, which symbolizes “strength, maturity, wisdom and religion.” On the other hand, lesser forms of facial hair like the “half-beard,” his name for a mustache, were considered a “monstrous sign.”

You can explore more of the Apologia de Barbis on the British Library’s website.