Artists in Late Medieval Germany represented Christ in all his human suffering.

We all know what Pietàs stands for in art. Paintings, sculptures or mosaics depicting the “Pietà” usually feature a dead Christ with a sorrowful Virgin Mary (and occasionally a sorrowful Saint John).

Western artists have produced countless version of this subject. In virtually every Pietà (latin for “pity” or “mercy”) from the early Middle Ages, from Giotto to Simone Martini, Christ is depicted as lifeless but still very “godly” in his peaceful surrender to death. His body and facial features are still very beautiful despite all the suffering. But during the late Middle Ages, scholars and preachers started to stress Christ’s humanity rather than his god-like attributes. From Francis of Assisi, who embraced Christ’s poverty, to St. Bonaventure, who imagined Mary’s thoughts as a mother holding her dead son, the human aspect of Jesus was a key element of Late Middle Age Christianity. When a group of German artist translated this focus on Christ’s humanity into art, the German Pietà style was born. 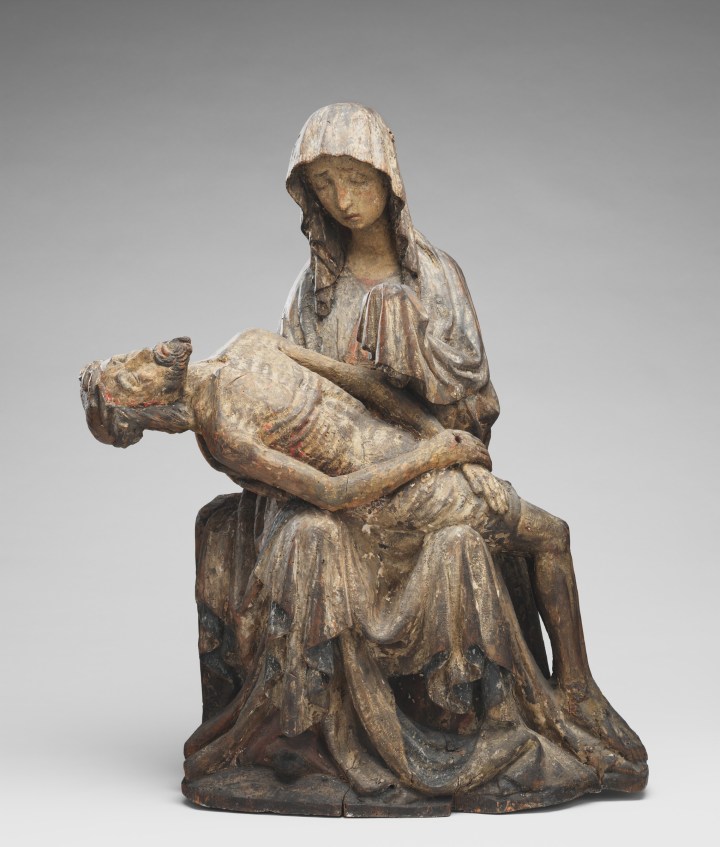 German Pietàs differ radically from previous version of Pietàs because of the deep humanity of their two subjects, Jesus and Mary. Several versions of this kind of Pietà, crafted in wood and painted with colorful paint, appeared in Germany in the late 13th century and early 14th century.

The most widely known example of this idiosyncratic style is the Röttgen Pietà, which takes its name from the Röttgen collection (now the museum of Rheinisches Landesmuseum) in Bonn, Germany, where it is kept.

In this moving sculpture, Christ is depicted with severe wounds, featuring three-dimensional outpourings of blood and taut skin, that stress the horrific death he suffered. Mary takes on an angry pose, a steep departure form the kind of “godly” understanding that she usually takes on in traditional Pietàs. In Pietàs like the one by Giotto or Michelangelo, the Mother of Jesus is in fact depicted in her god-like version, as the “Queen of Heaven” who knows that her son’s death is temporary. But as explained by Dr. Nancy Ross, a Contributing Editor for Medieval Art at the Khan Academy, in this version, she is “furious” and can’t make sense of why the son of God had to endure all that brutal suffering.

In German Pietàs, the intention of the artist was to evoke a deep sense of empathy in viewers. As Ross explains, this is partly in line with Late Gothic art that often features dramatic presentations to evoke an emotional response in viewers. But it was also the result of a shift in thinking, from seeing Jesus and Mary as “distant” holy figures that need to be revered to envisioning them as human-like figures who endured suffering just like anyone else. It is through this common suffering that the viewers were asked to connect with God.