Pope Emeritus: The whole understanding of “right” is at risk 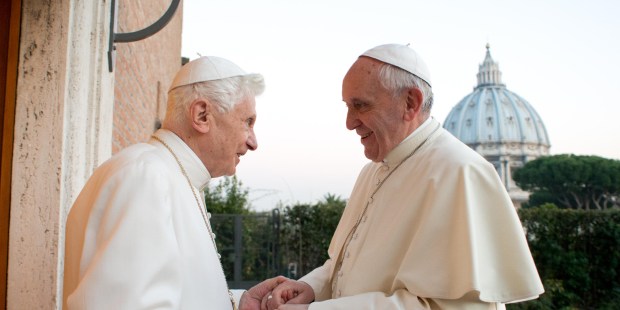 Francis and Benedict join in praising initiative to study the foundation of human dignity.

The “multiplication of rights” poses the risk of the “destruction of the idea of right,” according to Pope Emeritus Benedict XVI, in a letter published by the Holy See on November 15.

The Pope Emeritus’ message was read the same day, along with another from Pope Francis, at the inauguration of an international symposium on the theme, “Fundamental Rights and Conflicts Among Rights” organized by the Joseph Ratzinger—Benedict XVI Foundation.

“It seemed important to me that the problem of the ‘multiplication of rights’ and the risk ‘of the destruction of the idea of right’ be explicitly addressed,” wrote the German pontiff in the letter, addressed to the president of the Foundation, Fr. Federico Lombardi.

Indeed, this question merits, in his opinion, a “profound and systematic reflection, as the Symposium’s program shows it intends.”

For Pope Francis’ predecessor, this problem remains “relevant and fundamental” in order to “protect the foundations for the human family to live together.”

In fact, on the same day that Benedict’s letter was read, headlines noted that a “UN body seeks to define abortion and assisted suicide as a ‘human right.’”

Read more:
In Toronto, parents may no longer have a say in child euthanasia

For his part, the Argentine Pope in his letter noted a desire that “the Symposium, of high academic level,” may “contribute with courage and depth to illuminate an essential problem for the protection of the dignity of the human person and its integral development.”

The Vatican’s Joseph Ratzinger—Benedict XVI Foundation was founded in 2010 by Pope Benedict XVI himself (2005-2013). This organization aims to promote the study of Joseph Ratzinger’s thought. It organizes conferences and rewards researchers for the quality of their scientific research.

In addition to the Ratzinger Prize, each year it awards 10 scholarships, with a total value in 2015 of 120,000 euros. Pope Francis will present the Ratzinger 2018 prize on November 17.

Read more:
For the first time, the Ratzinger Prize is awarded to a non-theologian: the Orthodox composer Arvo Pärt