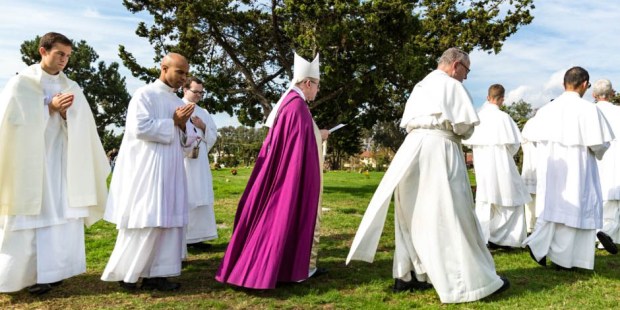 Their search for a new physical abbey led them to create a virtual space where they are ministering to their flocks.

The Norbertine priests at St. Michael’s Abbey in Silverado, California, could see the writing on the wall. They knew they would have to move. Besides sitting on geologically unstable land, their abbey was bursting at the seams. Every year there was a steady stream of men wanting to join their community.

The journey to a new physical abbey has led the community to the create a virtual abbey, open to people near and far who are looking for spiritual food.

Father Ambrose Christe, the vocations director and novice master at St. Michael’s, told Aleteia his community has always had a steady stream of vocations. Despite national trends, every year men have been applying to enter the community. As long as 15 years ago it was clear the community needed a new abbey to meet the demands of the steady growth.

Currently there are 90 men living at St. Michael’s Abbey, 30 of whom are seminarians. “Nine joined us in August and we had to waitlist three for next year,” Fr. Ambrose said. Some of the seminarians live in trailers on the abbey’s property. Meanwhile some of the priests live off-site at the parish or the boarding school run by the community.

Fr. Ambrose attributes the steady vocations to young people’s desire to “be heroes with their lives” and a thirst to be part of a real community.  He said the young men coming to the abbey are “starving for community life and real friendship.” The Norbertines’ focus on community life is attractive to these men.

Read more:
It’s time to treat friendship as essential to our well-being

With the need for a new home becoming more and more urgent, in 2014 the community launched a fundraising campaign. They needed $120 million to build a new abbey on a piece of land they had secured. Fundraising experts told them they would only be able to raise half that amount.

When Shane Giblin came on board in 2016 as the abbey’s Advancement Officer, the community was already at the halfway mark. He told Aleteia the push to raise the rest of the money was nothing short of “a miracle.” It also showed how many lives were affected by the Norbertines’ ministry in California.

Reaching their goal meant Norbertines could build the new abbey, take in more vocations, and minister to more people. But it still wasn’t enough. The community wanted a more immediate way to thank their community and support souls.

So they created The Abbot’s Circle website. The site gives donors access to videos and texts on various spiritual topics. Audio of the community’s Gregorian chants is also available on the website.

In the new year the platform will host a series of online classes taught by the priests at St. Michael’s. The community is also preparing to roll out “Ask an Abbot.” This feature will let users tell the community what topics they would like to see covered online. Users can also submit prayer requests.

While an online platform runs the risk of staying superficial, Fr. Ambrose said the content on the platform is a “first wave” of information that “opens [people] up to the spiritual body of Christ.”

The Abbot’s Circle is free until December 1.

Meanwhile, construction is currently underway on the new abbey in California. It will have space for 90 men and is expected to be ready in the fall of 2020. The community is already looking at the idea of opening a “daughter house,” a second house for their community in another location.