The horrible history of the biblical Assyrians comes to life

The Trustees of the British Museum

A new exhibit at the British Museum shows that even by the standards of the time, their cruelty was legendary.

Though the title proclaims it to be about one man – “I am Ashurbanipal, King of the World, King of Assyria” – the exhibition is more about the times and places in which this ruler lived, and waged war. 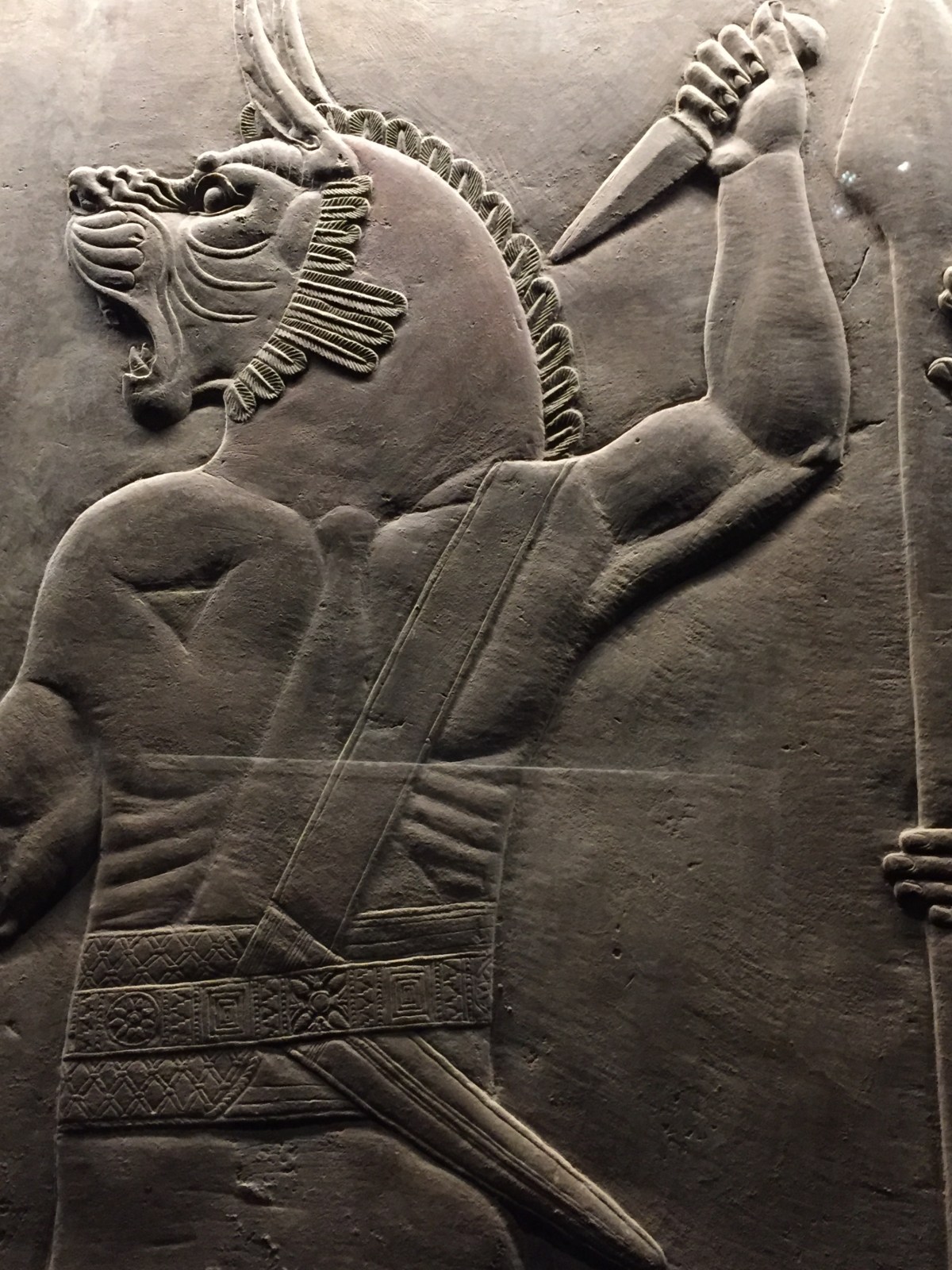 Ashurbanipal, who reigned from 669 to 626 BC, was a great destroyer of his enemies, but also a committed builder of monuments to his glory. His palace at Nineveh contains some of the ancient world’s most impressive and informative carvings, created during his lifetime, mainly to intimidate visitors. Many of these have been kept at the British Museum since the city’s ruins were discovered in the 19th century.

Assyria’s last great king, Ashurbanipal, gets the briefest of mentions in the Old Testament (Ezra 4:9-10). His kingdom, on the other hand, is everywhere in the Hebrew Bible. Nineveh was singled out as a place of consummate sin. Back in the 8th century BC, the Assyrian ruler Tiglath-Pileser had “carried off Israel’s inhabitants and its possessions to Assyria,” according to his own records. The people of Israel fared no better in their own accounts:”… King Tiglath-Pileser deported the people to Assyria.” [2 Kings 15:29].

The Assyrians created the greatest empire of their time, taking on all comers with ferocity. There were many points at which their conquests became part of the biblical story. One of the most prominent was Manessah of Judah, who appears to have picked the wrong side by backing rebels against Ashurbanipal. According to the Bible he had led his people into idolatry, for which there was bound to be retribution. His reward was capture by Ashurbanipal, who in characteristic fashion put a hook through his nose and dragged him away. It seems that the experience made Manessah repent and abandon his polytheism.

Ashurbanipal also received some Biblical justice when in 612 BC the Assyrian capital, Nineveh, was completely destroyed. The prophet Nahum had warned of this, and so it came to pass. The only detail Nahum got wrong was that Nineveh had walls too huge to burn, so it was abandoned instead, to be lost in the sand until discovered by Henry Layard in 1847. The son of the rival king who sacked Nineveh became one of the best-known names in the Old Testament, King Nebuchadnezzar II.

The vivid stories of the Bible are given historical life in highly visual fashion at the British Museum. Gypsum panels that normally sit unnoticed in permanent galleries have been lit so superbly that they breathe with the suffering that the Assyrians handed out. Even by the standards of the time, their cruelty was legendary. One especially gruesome panel shows military captives having their tongues cut out to reduce the screams when they were later skinned alive – also shown on the panel.

Viewers should be grateful that the full-color effect of the stonework has been lost over the millennia. Like ancient Greek sculptures that are admired for their pale, uncolored serenity, the Assyrians reveled in some of the most outrageous hues that existed before chemical paints were introduced. In one section of the exhibition there is a panel with colors added, in Assyrian taste. The effect is unsettling, but rest assured that the stones are not being harmed in the process; it is an effect achieved with projectors.

What the carved stones reveal is not just the carefully administered butchery of the time, but also the more pleasant side of life. Biblical banquets are revived in wonderful carvings of servants carrying all manner of foodstuffs for the latest celebration. Dried locusts on sticks are perhaps the least appetizing delicacies on view.

Ashurbanipal’s palaces were in many ways similar to those described in the Bible. Grandeur and sensual luxury were the main ingredients in their interior design. As Ashurbanipal himself declared on clay tablets filed away by his highly efficient legions of bureaucrats: “I roofed the palace with long beams of cedar grown on Mount Sinara and Mount Lebanon. I fastened bands of bronze on doors of white cedar, whose scent is sweet, and fixed them in its gateways.”

He also installed vast numbers of graven images, all arranged according to long-forgotten rules of geomancy. The abundance of deities worshipped in that region tells us why the first two of the Ten Commandments are at the top of the list. The most frequently encountered is Lamassu, with the body of an eagle-winged bull or lion and a human head. Ezekial wrote about this ubiquitous symbol. So enduring was its legacy, the components ended up representing the Four Evangelists

Lamassu is less frightening to look at than some of the other divinities of Mesopotamia. Domestic animals could be truly alarming too. The dogs that feature in some of the Assyrian carvings are a double for the most vicious of modern-day breeds. Most terrifying of all are the humans, though. This was a time of constant warfare in which civilians were as much the victims as warriors. Whole populations, including the Jews, were moved from one land to another. In an echo of the present day on the Plains of Nineveh, the victors would regularly make slaves of all the captives they didn’t kill. Young women were especially prized.

It is no wonder that when Christianity emerged in that region its central message made a lasting impression by proclaiming peace and love.