The tallest Catholic church in the world is in Africa

The Basilica of Our Lady of Peace in Ivory Coast was inspired by St. Peter’s in Rome.

Since construction was completed in 1989, the Basilica of Our Lady of Peace in Ivory Coast in West Africa has held the title of tallest Catholic church in the world (the tallest church of any kind is the Protestant Ulm Minster in Germany at 530 feet tall).

At 518 feet high, Our Lady of Peace tops the Cologne cathedral, and according to Guinness World Records, is also the largest church in the world, having edged out St. Peter’s Basilica. That record however, comes with an asterisk, as its 320,000 square feet includes a rectory and a villa.

Constructed out of Italian marble and French stained glass windows, the church was the dream of Ivory Coast’s President Houphouët-Boigny, who chose his birthplace of Yamoussoukro as the site of the country’s new capital in 1983. According to Wikipedia, he “wanted to memorialize himself with the construction of what he called the greatest church in the world.”

Designed to resemble St. Peter’s Basilica, the domed church, seats 7,000 and can hold 18,000 worshipers. The church was consecrated on September 10, 1990 by Pope John Paul II, after the Vatican accepted it as a gift. 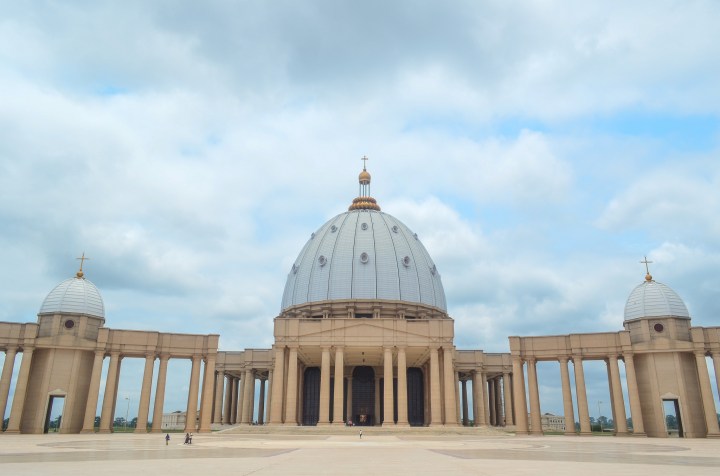