Rome’s Pantheon, a place of Christian worship for the past 1,400 years

The ancient pagan temple turned church is remarkably well preserved -- it boasts the oldest unsupported concrete dome in the world.

When walking around the cobbled streets of Rome’s city center, it is not unusual to bump into buildings that are thousands of years old. But they are usually preserved as ruins, like the world famous Colosseum. That’s what makes the Pantheon, an ancient Roman pagan temple turned church, such an extraordinary building. The Pantheon is, in fact, both thousands of years old—it was built between 113 and 125—and incredibly well-preserved. Entering its Corinthian colonnade feels like stepping into a time machine leading back to ancient Rome. 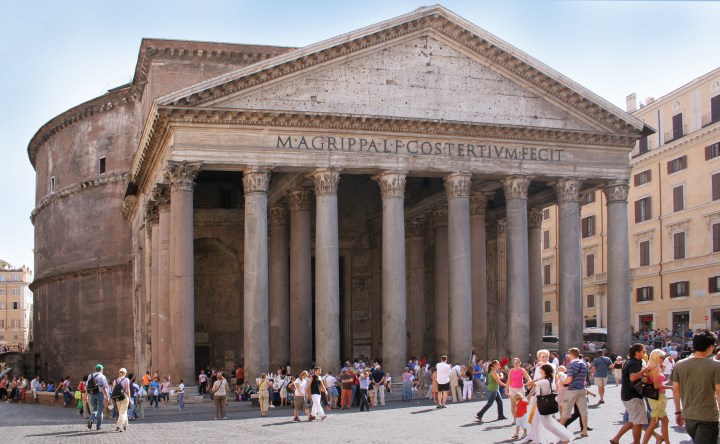 Built by order of Roman consul and architect Marcus Agrippa during Emperor Augustus’s reign (27 BC – 14 AD) and completed during the reign of emperor Hadrian, the Pantheon (a word that literally means “temple of all gods” in ancient Greek) was originally planned to serve as private temple for Agrippa himself.

That’s why an inscription in the front of the temple reads: “M. Agrippa L[ucii] f[ilius] co[n]s[ul] tertium fecit,” which means “Marcus Agrippa, son of Lucius, made [this building] when consul for the third time.” That facade is also the only original piece of Agrippa’s temple that survived intact. The rest of the original structure burned down in a series of fires between the years 80 and 110 and the temple was thus rebuilt under Emperor Hadrian, who dedicated it to Agrippa probably in 126.

In the 7th century, Emperor Phocas donated the temple to Pope Boniface IV, who ordered that it be reconverted to a church dedicated to the Virgin Mary and the Martyrs, officially known as “Sancta Maria ad Martyres” but more commonly referred to as  “Santa Maria Rotunda,” literally “Saint Mary in the Round,” in reference to the building’s circular shape. The Pantheon has served as Catholic church since then and still does. Mass is celebrated every Sunday at 10:30 a.m. and on Saturday at 5 p.m. for non-Italian speakers.

The Pantheon structure in itself is an architectural wonder, especially given the fact that it was built in 126. Its dome, with a 141-ft long diameter, is still the largest unreinforced concrete dome in the world. The entirety of its weight is supported by a ring of voussoirs, wedge shaped structures supporting vaults that lead up to a round shaped opening at the top called oculus. The oculus acts as a natural air conditioning by letting air in an out of the church. The oculus is also open to light and, of course, rain—a drainage system on the bottom lets water flow out of the building on rainy days.

Throughout the day, light beams shining from the oculus illuminate different parts of the interiors, acting like a natural sundial.

The interior of the dome is characterized by recurrent circular and square motif—a sharp contrast with the checkerboard themes of the floor—and features five evenly spaced out rings of 18 sunken panels, called coffers, that probably had a symbolic meaning. Art historians believe they were used as a symbol of the arched vault of the heavens or as geometrical or lunar symbols.

This structure has remained more or less unchanged throughout the centuries, save for modifications that occurred during the 17th and 18th centuries. In the 17th century, Pope Urban VIII ordered that the bronze ceiling of the Pantheon’s portico be melted down in order to make cannons for the papal fort in Castel Sant’Angelo, which previously served as a mausoleum for Emperor Hadrian, and for other works in the papal estate.

A few years later, Pope Clement XI commissioned the high altars and the apses of the church, which were designed by Roman architect Alessandro Specchi. Right above the apse is a 7th-century icon of the Virgin that was donated by Emperor Phocas to  Pope Boniface IV on the day when the Pantheon officially turned into a Christian church (May 13, 609).

From the Renaissance onward, the Pantheon was decorated with beautiful paintings, such as the Annunciation by Renaissance painter Melozzo da Forlì. Another notable work of art is the Madonna of the Girdle and of St Nicholas of Bari, dating to 1686 and attributed to an unknown artist.

On the left side of the first niche of the Pantheon we find a canvas by Baroque painter Clement Maioli depicting St Lawrence and St Agnes (1645–1650), while the right features a work by Renaissance painter Pietro Paolo Bonzi representing the Gospel tale of the Incredulity of St Thomas (1633).

The third niche is adorned with a sculpture of Saint Anne and the Blessed Virgin by Roman sculptor Lorenzone as well as the painting titled The Madonna of Mercy between St Francis and St John the Baptist from the so called Umbrian school of painting, which included Renaissance masters like Raphael and Perugino. The final niche on the right side features a beautiful marble statue of Saint Anastasio completed in 1725 by late-Baroque sculptor Bernardino Cametti.

The Renaissance period also marks the start of a series of notable burials inside the Pantheon. Some of the most important Italian figures of all time, from Renaissance painter Raphael to King Victor Emmanuel II, are buried inside the temple turned church. Raphael’s tomb lies under a beautiful sculpture of the Madonna del Sasso, literally the Madonna of the Stone, sculpted by Raphael’s pupil Lorenzetto.

Today, the Pantheon is one of the most visited landmarks in Italy. It was estimated that in 2017 more than 8 million people stepped into its thousand-years-old portico and wondered at the enchanting beauty of its oculus. The Pantheon is open to tourists all year long but perhaps the best time for a visit is during the Pentecost Sunday, celebrated on the 50th day after Easter, where a morning Mass is followed by a , a thousand-year-old tradition initiated by early Christians, who used red roses as a symbol of the Holy Spirit descending on the Apostles as tongues of flame.