The National Christmas Tree: A history in lights 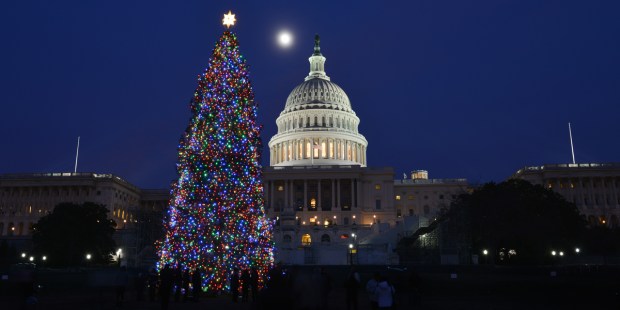 For almost 100 years, America has gathered around its own national Christmas tree, and traditions over the years have reflected national concerns, historical events and public debates.

The National Christmas Tree is a living tree that can be viewed year-round in President’s Park. There will also be 56 smaller trees surround the 47-foot tree, representing each U.S. state, territory and the District of Columbia. Fifty-six schools across the country are creating ornaments to adorn them.

The first lighting took place 96 years ago on Christmas Eve in 1923, when President Calvin Coolidge lit a Christmas tree in front of 3,000 spectators on the Ellipse (White House). Since 1923, each succeeding president has carried on the tradition.

Even then, it was commercial interests that spurred the event on. According to Wikipedia, the Society for Electrical Development (an electrical industry trade group) was looking for a way to encourage people to purchase more electric Christmas lights and use electricity. Frederick Morris Feiker, a press aid for Secretary of Commerce Herbert Hoover who earlier had been editor of Electrical World and Electrical Merchandising, suggested that President Coolidge personally light the tree as a way of giving Christmas lights prominence.

The tree that Coolidge ended up lighting was a balsam fir from Middlebury College in Vermont. But there has been a steady succession of trees, some of them cut and hauled in from various parts of the country, and some living trees that have been transplanted (at one point, that was to assuage the concerns of environmentalists). Many of the live trees have fallen victim to accidents, poor adaptation to the local soil, or storms.

But one fairly consistent practice has been the presence of, and usually an address by, the sitting president, or vice president in case the president could not make it. “President Franklin D. Roosevelt never missed the opportunity to deliver a Christmas Eve message heard by radio listeners coast to coast,” a history at the National Christmas Tree Lighting website tells us.

“A year before United States entered World War II, … Roosevelt condemned war, invoked the beatitudes of Christ, and called on ‘belligerent nations to read the Sermon on the Mount,'” it says.

Less than a year later, of course, he led the nation into war, and the 1941 lighting was the last time the tree was lit until President Harry S. Truman did the honors in 1945. “This is the Christmas that a war-weary world has prayed for through long and awful years,” Truman said at the event. “With peace come joy and gladness.”

In 1954, after yet another conflict—this time in Korea—the Washington Board of Trade and the Washington Citizen’s Committee conceived of a wider celebration called the “Christmas Pageant of Peace” in which the tree lighting event expanded to three weeks. A “Pathway of Peace” was composed of smaller trees representing all the states, territories and the District of Columbia. The 1954 opening ceremony was held December 17, when President Dwight D. Eisenhower, who had been Supreme Allied Commander in Europe during World War II, turned the switch.

From the first event in 1923, which took place on Christmas Eve, the lighting of the Christmas tree has gotten earlier and earlier. But in 1963, after the assassination of President John F. Kennedy on November 22, the lighting was postponed until after a 30-day period of mourning.

“Today we come to the end of a season of great national sorrow, and to the beginning of the season of great, eternal joy,” said President Lyndon B. Johnson on the occasion.

During the height of the Vietnam War, the tree lighting was interrupted by anti-war protesters, and in 1979, only the star atop the tree was lit. President Jimmy Carter told the assembled crowd that the tree would remain dark until the American hostages in Iran were freed. The following year, with the hostages still in captivity, the lights on the tree shone for 417 seconds, one second for every day that they had been captive.

In the wake of the September 11 attacks, the 2001 tree took on a patriotic red, white, and blue lighting scheme.