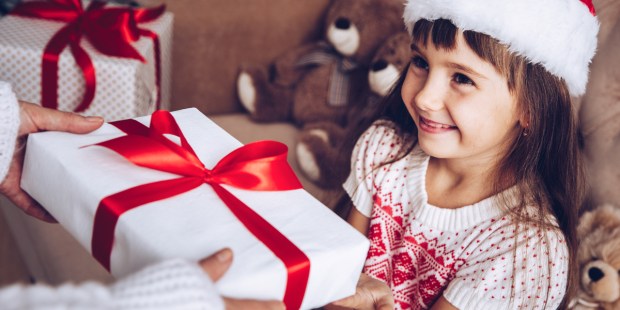 Following the “good toy principle” can make the difference.

I struggle with Christmas shopping, partly because my willpower is about on par with my three-year-old’s. He wants that awesome Paw Patrol action set complete with all the vehicles? I want that for him too! Man, I never had any of that trademarked stuff when I was a kid, and I haven’t forgotten how glorious it all looked on the shelves in Target.

I’m resisting the lure of flashy toys better this year, though, because of a rule I came across that made too much sense to ignore. This year, everything I buy is going to meet the standards of the “good toy principle.” The idea comes from Lenore Skenazy, author of Free Range Parenting:

The reason you always hear parents marveling, “I bought him that walking, talking, Star Trek mega death ray, but he was more interested in the box,” is that the box is more interesting, in some ways (after one has pretended to shoot one’s little brother several times with the mega death ray and sent him wailing from the room). When a kid has a box, it can be anything, right? A house, a castle, a cave. So it’s already more flexible than most of today’s fancy toys … a box abides by the simple “good toy” principle, which is that it gives all the make-believe power to the kid. A good toy, they say, is 10 percent toy, and 90 percent child.

I thought about all the toys that have survived my periodic purges (when I tiptoe around at night and bag up anything I haven’t seen my son playing with in living memory) and I realized that all of the remaining toys more or less meet the 10 percent toy, 90 percent child test. That is, the toy is fun mostly because my son is fun. The toy gets the play started, but it’s his own ideas, his own creativity, his unique personality, that makes his games wonderful.

Your child isn’t the generic, picture-perfect kid you see in the commercials. He is himself, and no toy is more wonderful that he is. That’s why a box can be more fun than a flashy blaster — the blaster gets boring, but a kid is never gets boring … and the box he’s playing with is flexible enough to work as an extension of his own awesomeness.

The Good Toy Principle is why toys like Legos are universally loved. It’s not that little plastic bricks are that interesting in themselves, but the Legos can be as interesting as the child who plays with them, and that’s saying something.

The Good Toy Principle is why my son is a lot more interested in blank paper than coloring books, more interested in his Matchbox cars than in the car rugs they’re supposed to go on. It’s why this summer, once the novelty wore off, he was less interested in the big trucks we got him to play on the dirt pile with, and more interested in my gardening spade. If you have a spade, you can be a digger — and also a chef (dirt soup, anyone?) or a gardener or an archaeologist, or who knows what else. Or you don’t have to be anything. When nothing’s trying to lay down rules, you can just mess around, and that’s wonderful too.

It can be tough to shop for kids, when every store around now is clamoring to convince you that only their toy can make your child happy. The Good Toy Principle is helping me cut through all of that noise, and point me towards the things I know my kids will play with for more than a week.

Read more:
A Couples’ Guide to Christmas Giving (Hint: He Doesn’t Want that Flatware Set as Much as You Do)