As one of the world’s largest landowners, the Catholic Church can help save the Earth 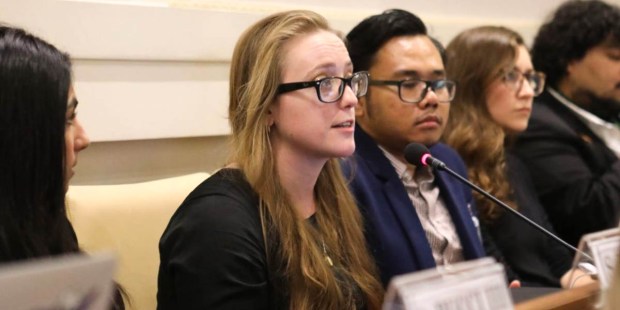 Molly Burhans, founder of GoodLands, wants to help the Church use its property as a vehicle for good.

The first thing you notice about the before-and-after photos is the increased number of trees. The parish grounds had been a wide open expanse of land, much of it taken up by the church, its ancillary buildings, and a large, paved parking lot. There were fields that could be used for just about anything—parish picnics, extra parking, or impromptu ball games by neighborhood kids. It could also be sold off if the parish or the diocese needed some extra cash. And who doesn’t need that these days?

Overall, the look of the place was not very inviting.

After Molly Burhans’ GoodLands proposed makeover, however, the church was not such a lonely-looking building anymore. It was now accompanied by a host of features on land that was being used in creative ways:

Around the perimeter of the five-acre property, reforestation helps filter pollutants from passing vehicles and helps reduce stormwater runoff. A special “habitat corridor” restores food sources and habitat for migratory and non-migratory birds and insects. Canopy trees near the church and parish hall reduce cooling costs in the summer.

And that’s just on the grounds of one parish. Burhans, a young expert who has a new vision for the care of church land, estimates that the collective acreage of church grounds, schools, hospitals, cemeteries, monasteries and other properties that come under the Catholic Church worldwide easily exceeds the land area of France and Spain. When you look at it that way, there’s a lot the Church can do to help prevent the kinds of ills that many are predicting if environmental concerns are not addressed. The Church, Burhans says, is “a landowner with strong and rooted values.” She founded GoodLands, to help the Church use its land holdings as a vehicle for good.

The 29-year-old recently became the first Catholic from the United States to be awarded an Ashoka Fellowship. Ashoka supports the people and the ideas that “we believe have the best chance of solving the most pressing social problems of our era,” says the U.S. branch of the foundation. “Social entrepreneurs imagine a new way forward and build it for everyone. They respond to society’s urgent problems with extraordinary leverage, creativity and commitment, and open ways for others to contribute as changemakers.”a Master’s in science and ecological design

With a bachelor’s degree from Canisius College in Buffalo and a master’s in science and ecological design from the Conway School of Landscape Design in Massachusetts, Burhans became interested in geographic information systems—the type of software used to make maps.

“This is not just a static picture,” she said as she opened a GoodLands-created map on her computer screen in her office in New Haven, Connecticut. “Behind that is a massive database containing every single diocese, every number of priests per diocese, Catholics per diocese. There’s a lot of heavy technology involved. There’s also a lot of aesthetics and communications. I decided this is a much better approach for the Church than doing these site scale design master planning. I should be helping communities analyze tens, hundreds of properties at once, to find where they can have impact.”

Beginning her work even before the 2015 release of Pope Francis’s encyclical Laudato Si’ (On Care for Our Common Home), Burhans found that there was really no individual or agency helping the Church “steward its property in a way that was aligned with its missions and supported them all” and guide the nature conservancy of the Catholic world.

“So I founded GoodLands originally with the kind of idea of conservation in mind, to fill this massive void,” she said. She discovered that there wasn’t a lot of incentivizing for conservation, including tax incentives.

“I also saw that environmental programs like rain gardens, rainwater collection, stormwater management of various types, different maintenance regimes for lawns, simple things like that, were mostly being done, if they were being done at all, on wealthy parishes’s properties, where people didn’t have to worry about who’d be getting clothing and who needs a meal,” she said. “They were the parishes in areas that were more affluent. The reality is if you don’t understand the context of where you’re putting in an environmental program you can waste a huge amount, and you can have hundreds of times the impact if you put that same program on the right property.”

So GoodLands started analyzing large amounts of property to discern where to put environmental programs, where conservation efforts or solar energy made more sense, “where you can get the most return from it, where affordable housing makes sense, so that would be like a property that doesn’t have an incredibly high market value.”

So how does GoodLands do its work? A team will survey a property and assess how it is functioning, including how it contributes to local ecosystems and the community.

“Then we build a robust, dynamic map that’s essentially a powerful database that helps dioceses, religious orders, and other large landholders make informed decisions about land use,” Burhans explained. “Our maps incorporate attributes of the property, priorities of the community, and comparative data from similar Catholic properties. The composite picture allows us to advise on land use.”

The company merely provides the data in a way that Catholic concerns can use to make their own decisions. In the case of the parish that had all that extra land, the repurposing helped it become “kind of a destination where people with their families go and spend time more, they’re more connected with their faith, say, through the contemplative garden, etc.,” Burhans summarized.

Land is the Church’s “most financially and politically powerful asset, and we need to be stewards of it,” Burhans said. “The way we maintain our properties actually influences public health, mental health, childhood development. When you do not have a healthy environment, it impacts everything you do.”

Trees, for example, can help filter air, reduce asthma, and lower blood pressure. “Trees have been shown to decrease violence,” Burhans said. “There is a link between how our land is scaped and peace within a community.”

What’s important to bear in mind is that everything the Church does on earth, including the corporal acts of mercy, takes place within an environment. “I think Laudato Si’ did such a fantastic job at really capturing that the environment is this matrix where all of this stuff happens,” Burhans said. “As a person, you can care for the earth and ignore the poor the sick and most vulnerable. You shouldn’t, but you can. But the second you stop caring for your home around you, our common home, the environment, that immediately impacts the poor and the sick and the most vulnerable.

“The way we manage and use our land has a moral dimension,” she concluded. “That is one of the most important foundations of Goodlands, realizing that and really transforming a sense of ownership of our spaces into a sense of stewardship.”