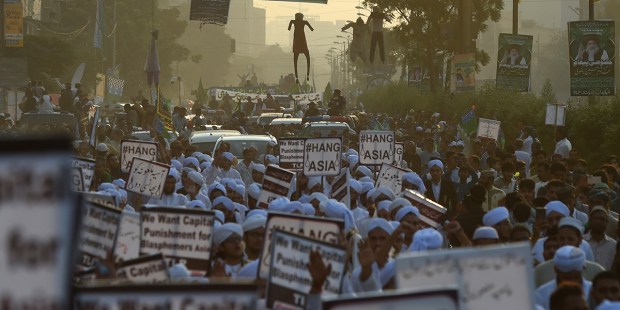 Will Asia Bibi ever be free? The Catholic woman from Pakistan, whose death sentence for blasphemy against Islam was reversed by that nation’s Supreme Court, is still being targeted by radical Muslims in her native land. She and her family would like to be granted asylum by another country, but even if another nation would open its doors, she might not be safe.

Not only is Bibi and her family at risk of retaliation, a neighboring family that cared for her five children while she spent eight years in prison, have been reporting intimidation.

Joseph Nadeem has helped the woman’s family with legal support and accompanying her husband, Asihiq, and daughter Eisham in their travels abroad to speak about their plight. But now Nadeem and his family are in hiding with two of Bibi’s daughters and have had to move four times.

“Just as soon as Asia was acquitted, we were forced to flee,” he told Catholic charity Aid to the Church in Need. “Asia and her husband are currently in a place of safety, protected by the government, but we could not remain with them. The Islamists keep hunting us down, and every time we find we are in danger, we have to move on immediately. We cannot go out openly to buy food. I only ever go out by night and with my face covered.”

There is a long history of intimidation on the part of Islamists against anyone who even expresses sympathy with those who are considered “blasphemers.” Minorities minister Shahbaz Bhatti and Punjab Governor Salmaan Taseer were both assassinated for advocating on her behalf and opposing the blasphemy laws.

After Bibi’s acquittal October 31, violent riots broke out in Pakistan, led by the Islamic radical party Tehreek-e-Labbaik Pakistan (TLP). Police arrested TLP’s leader, Khadim Hussain Rizvi, on November 23, but Rizvi threatened a fatwa against the magistrates who acquitted Bibi. Riots subsided only after the government agreed to keep Bibi in the country and allow a review petition to be filed in court.

Australian, Canadian and Dutch diplomats are reportedly negotiating with the Pakistani government for Bibi’s release from Pakistan so she might travel to one of those countries for asylum.

Politico reported at the end of November that the evangelical American Family Association urged Secretary of State Mike Pompeo to offer her asylum. Former Arkansas Gov. Mike Huckabee made a similar appeal to President Donald J. Trump in an open letter this week.

According to Fr. David Stewart, writing in America magazine, Bibi and her family are believed to have asked several countries for safe transit and sanctuary, including Great Britain.

“But the Home Office concluded that Britain would not grant asylum to Ms. Bibi after the Foreign Office expressed fears of retaliation against its embassies and civilians in other nations,” Fr. Stewart writes. “This has led to accusations that Britain’s asylum policy is effectively being directed by mobs in Pakistan, a charge that the government unconvincingly tried to refute. Some have murmured that fear of similar opposition from Muslim groups in English cities could have influenced the government’s decision. Deep unease continues here after the government’s tepid response to Ms. Bibi’s pleas. Is the decision to refuse asylum mainly predicated on fear of retaliation? If so, the state’s moral principles have surely been watered down, if not abandoned.”

Fr. Stewart reports some hope however, in that a number of prominent British imams have joined calls for asylum for Bibi and her family.