In Images: The real face of Santa Claus

Many are familiar with the image of jolly old St. Nick, popularized by the Coca-Cola company, but modern-day legends have obscured the reality of who Santa Claus was and what he really looked like.

In the past few years, researchers in Liverpool have been able to reconstruct the actual face of 4th-century bishop St. Nicholas using modern technology. The result is fascinating and surprisingly similar to early icons of the man who would inspire the mythic figure of Santa Claus. 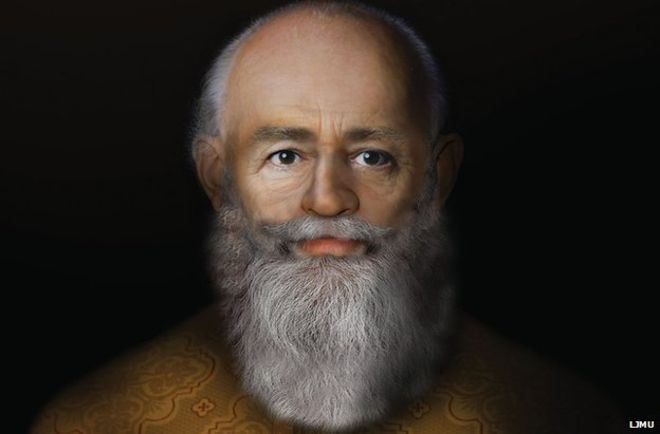 St. Nicholas is currently buried in the crypt of the Basilica di San Nicola in Bari, Italy. Most of his bones were moved there in the 11th century when a group of sailors took his remains from Myra during a time of confusion. When the crypt was repaired in the 1950s, Nicholas’ bones were taken out and examined by a team of professors. Thousands of measurements and x-ray photographs were taken of his skull and bones and archived for future study.

Then in 2004 Professor Caroline Wilkinson at the University of Manchester used facial reconstruction technology to visualize what St. Nicholas would have looked like based on the data previously recorded. Her findings were updated in 2014 and according to the BBC, this latest image “was based on ‘all the skeletal and historical material’ available” and “uses ‘the most up-to-date anatomical standards, Turkish tissue depth data and CGI techniques.’” The reconstruction was developed by the University of Dundee and Liverpool John Moores University.

Based on the findings St. Nicholas is described as “a Greek man, living in Asia Minor … about 60 years old, 5 feet 6 inches tall, who had a heavy jaw and a broken nose.”

What’s even more fascinating is how similar St. Nicholas’ face is to early icons of him. The St. Nicholas Center offers a comparative picture of the digital reconstruction alongside various icons of the 4th-century saint. The similarities are striking.

While he may not look like the jolly old St. Nick that the world is accustomed to, there do exist some features that are recognizable in popular representations and one could almost sense a twinkle in his eyes.

Read more:
The bones of St. Nicholas still exude a mysterious oil, with a mixed reputation