How poinsettias became the most popular potted Christmas plant

Poinsettias were associated with Christmas long before they were brought to the US from Mexico.

Advent is here and if they haven’t already shown up, poinsettias are sure to be in your church soon. The green and red foliage is just so festive for the season, a trait that was recognized a long time ago in its native Mexico, where they refer to the plant as flor de nochebuena, the Christmas Eve Flower. The English name “poinsettia” came from the man who brought the plant to the US, Joel R. Poinsett, an American diplomat who was sent south after the Mexican War of Independence in 1810.

The plants Poinsett imported would have borne little resemblance to the small potted plants that line church altars today. In the wild, poinsettias grow like trees, reaching heights of 8 feet. With their blazing red leaves, the great trees impressed Poinsett, who began taking clippings so he could send them to a South Carolina greenhouse to grow. 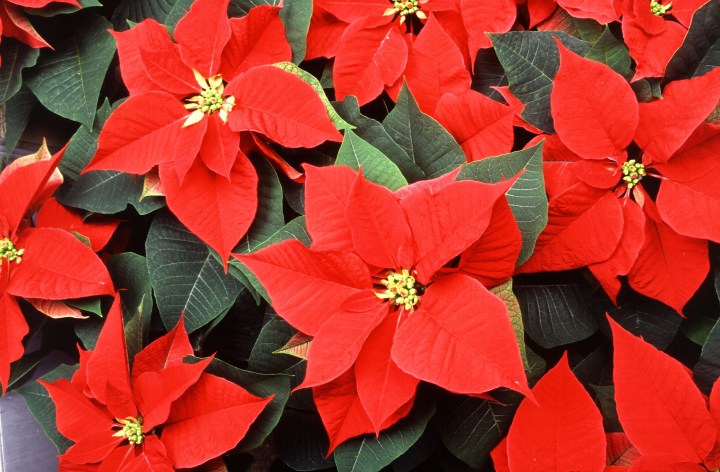 Poinsett grew many plants, which he shared with friends and botanical gardens. For the next 140 years the poinsettia made its way around the US, albeit slowly, and by the 1960s it had become one of the most popular Christmas plants. Unfortunately, this iteration of the plant was difficult to keep. The colored leaves would wilt and drop in a few days and growers had a hard time getting the flowers to bloom at the right moment to ship them out.

This was when a horticulturist for the U.S. Department of Agriculture, H. Marc Cathey, began experimenting with the fleeting flowers. Cathey discovered several compounds that stunted the plant’s growth and kept it a manageable size for potting. He is also the man responsible for figuring out how to keep the plant from flowering until distribution time, a process that Sarah Laskow from Atlas Obscura describes:

Every night, from 11 p.m. to 1 a.m., he would flash the plants with three seconds of light each minute, which would confuse them enough that they held their flower fire.

While Cathey was manipulating the plant with science, a family of farmers were using their agricultural know-how to make the plants stronger, more suited to life indoors, and to keep the flowers in bloom longer. The Ecke family saw the potential in poinsettias and made the decision to focus their business on them in 1910, but by the 1960s they had a large commercial operation selling cuttings of their plants.

It took three generations of the Ecke family’s dedication before poinsettias blew up in popularity. In 1986 the poinsettia pushed the chrysanthemum out of the top spot and became America’s best-selling potted flowering plant, an honor it would retain until orchids became popular at the turn of the century. Poinsettias grew into a 200 million dollar industry, and the Ecke family, which at one point distributed 90 percent of poinsettias in America, was the primary beneficiary.

Commercialization of the plant led to a greater variety, and today we can find poinsettias in many colors besides red, but the classic blazing bloomer is still the most popular, especially during the Christmas season. If planted, the poinsettia can still grow to tree size and bloom its most beautiful flowers, even if they are short-lived, just in time for Christmas.