Inscriptions and art found in these ancient burial places shed light on how the first Christians lived their faith.

Aside from the New Testament itself and some of the early letters of the Church Fathers, the catacombs are the oldest witness to the Christian faith.

The oldest of them, the Catacombs of Domitilla, dates back to the 2nd century. These catacombs were the burial site for a Roman aristocrat named Flavia Domitilla, whose uncle Domitian served as emperor from 81 to 96. Her husband Flavio Clemente held the office of consul during Domitian’s reign but was condemned to death in the year 95.

See the gallery below for photos of the Catacombs of Domitilla: 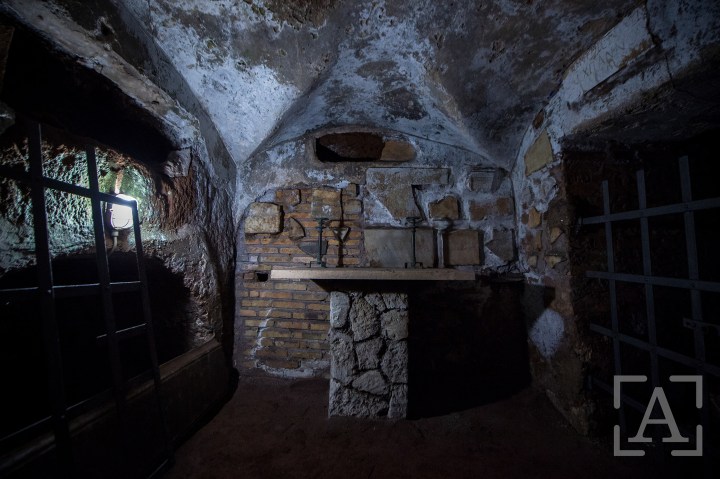 According to some scholars, the last book to be written in the New Testament—the Gospel of John—was composed during Domitian’s reign. Those years also coincide with one of the earliest Fathers, Clement, a pope whose epistle dates back to this period.

The inscriptions and art in the catacombs thus offer a window into the mind and heart of the very early Church, showing how the faith that was preached in the gospels and epistles was lived out by the first Christians. And the faith that these monuments testify to bears the distinctive marks of Catholicism.

Prayers for the dead

The catacombs are replete with inscriptions that offer abbreviated prayers known as acclamations for the dead. Here are some of them:

Some of the inscriptions are more explicit in asking for prayers for the dead. For example,

Ut quisquis de fratribus legerity, roget Deum ut sancto et innocent spiritu ad Deum suscipiatur. If any of the brethren reads this, let him ask that this holy and innocent soul may be received by God (Publications of the Catholic Truth Society.)

How sure can we be that early Christians really prayed for the dead? Are these short invocations enough? Fortunately there is testimony outside of the catacombs that validates their message. One is Tertullian, who lived from around 155 to 240. In On Monogamy, he writes the following in reference to widows:

Indeed, she prays for his soul, and requests refreshment for him meanwhile, and fellowship with him in the first resurrection; and she offers her sacrifice on the anniversaries of his falling asleep. For, unless she does these deeds, she has in the true sense divorced him, so far as in her lies; and indeed the more iniquitously.

Tertullian is not the only early witness to this practice. In the Confessions, St. Augustine also records his mother Monica asking him to pray for her after her death.

Prayers to the dead

The catacombs also contain instances of prayers to the dead:

One inscription in the Cemetery of Praetextatus directly asks for the intercession of the deceased when he meets Christ the judge at the moment of his death:

The catacombs also reflect an early devotion to Mary. The Catacombs of Priscilla contain the oldest known image of Mary, apparently nursing Jesus as a prophet addresses them and the Star of Bethlehem shines above them.