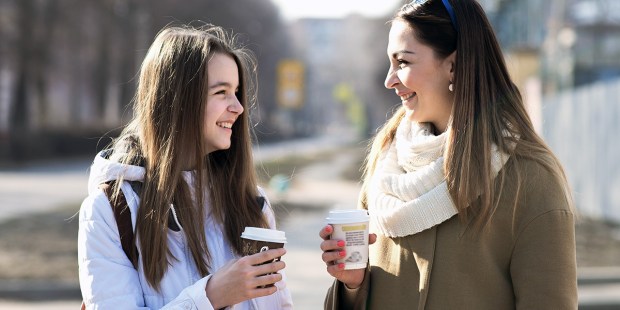 Setting rules is only half the story when it comes to helping our kids grow into virtuous adults.

In less than two weeks, I will be parenting an official teenager. It’s going to be an anticlimactic transition since she’s been a teenager for over a year, but the official seal of 13 at least gives me more street cred. Which I need, because y’all know that parenting a teenager is when it gets real.

Not that it wasn’t real before — there’s nothing unreal about the zombie-like months of infancy or the sticky-Cheerio-and-mystery-stain-sniffing years of toddlerhood. But there are a few golden years in there where kids are mostly self-sufficient but not yet feeling their independence that lulled me into a false sense of complacency. It started to crack about a year ago, but the last two months have shattered it into smithereens. My child is a teenager, and she is here. for. it.

So we’ve been spending a lot of time revisiting and revising ground rules. Some of them are easy to agree on — turn the phone in at 8, no apps without approval, and everything she does on her phone is tracked by mine. Others are harder — can she go to the movies with a group of mixed-gender friends? Can she hang out and watch the varsity games after her own games? Those are more situational, and they depend on various factors, but I make an effort to talk through them with her and to listen to her opinion rather than just giving or denying permission.

I’ve been told this is a weakness in my parenting, and in the past few months I’ve started to wonder if it is. I’ve always believed that it’s vital to give my kids a voice in our family, to show them that I trust and value their opinions so they, in turn, will learn to trust and value mine. But the onslaught of adolescence has made this seem almost foolishly optimistic … until I stumbled upon this video by Dr. Justin Coulson.

How to Raise an Independent Child with the Right Values

This short story narrows in on how to parent your child to true independence.Speaker: Dr Justin Coulson's Happy Families

If you’ve paid attention to the story, you don’t get it by saying, “They’re good rules and I expect that you will keep them. That’s part of being in this family.” That’s called control, and that’s not how we get to this point. Instead we get it through this thing called autonomy. Force creates resistance. But great relationships build autonomy, which allows us to leverage trust, which builds massive influence.

Here’s the truth about parenting a teenager: it doesn’t matter what the rules are or how much we agree on them at the outset; when the rubber hits the road my teenager will hate them. She will roll her eyes and stomp and complain and push boundaries at every turn, because she’s a teenager.

That’s hard for me. I don’t like to be in conflict with my kids, which is why it’s easy for me to talk with them about good rules but hard for me to stick to them. But I know that one of the reasons teenagers push boundaries is because they — like toddlers — desperately need the security of knowing the boundaries are fixed. My daughter needs to know she has limits and she needs me to enforce them now more than ever — but enforcing boundaries is not the same thing as exercising control.

This is why I believe that having conversations about rules is so vital. Our kids need to know that we value them, that the rules exist to keep them safe and to protect them — sometimes even from themselves. Being given rules with no context or explanations doesn’t make our kids feel protected, it makes them feel controlled. Denying our kids a voice and refusing to hear their opinion doesn’t build trust in our relationships, it creates resentment. And a child who spends their adolescence feeling controlled and harboring resentment will not grow into an adult who is capable of self-control or healthy relationships.

Having conversations about rules and boundaries isn’t a one-time thing. It’s a constant conversation that will continue over the years. It will require significantly more time and energy than simply setting rules and enforcing them — but in the end, I’ll have invested that time and energy into something much greater than the rules themselves. I’ll have invested it into my relationships with my children. And God willing, we will all be better, more virtuous and more loving, because of it.

Read more:
If we want courageous adults, we have to raise courageous kids