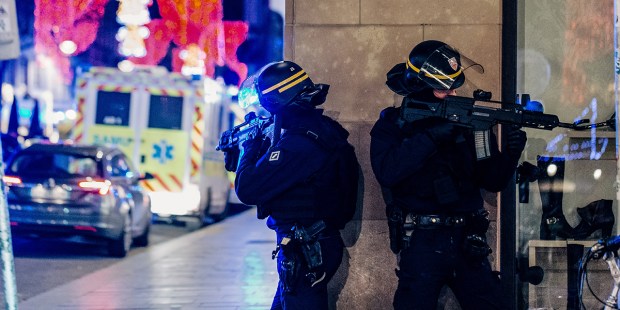 Two were left dead as a manhunt continues for the 29-year-old suspect who had been on a terrorist watchlist.

The gunman who opened fire Tuesday on an outdoor Christmas market in Strasbourg, France, Tuesday evening, shouted “Allahu Akbar” (“God is the greatest in Arabic),” reported the BBC.

At least two people were killed in the attack, and twelve wounded. One of the victims was reported to have been left “brain dead.”

The gunman, 29-year-old Chérif Chekatt, fled the scene in a tax and may have left the country, according to France’s Deputy Interior Minister Laurent Nuñez.

Born in Strasbourg, Chekatt, has a lengthy criminal record, with 27 convictions in France, Germany and Switzerland, and is thought to have been radicalized in prison. He was the subject of a watchlist of potential terrorists, according to the BBC report.

After Chekatt was convicted of robbery in Germany in 2016, he was deported to France in 2017, reported the Associated Press.

As a manhunt continues for the gunman, the country has moved to a high level of alert, with an increase in police presence and border security.

Strausbourg, the official seat of the European Parliament, has been the target of terrorist attacks in the past, including a failed plot by al-Qaeda to bomb the Christmas market on New Year’s Eve in 2000.

The Christmas market, known as Christkindelsmärik, attracts around 2 million visitors every year. The market, held near Strasbourg Cathedral, has been held since 1570, making it one of the oldest Europe.