The Church of the Nativity in Bethlehem, built over the cave where tradition holds that Christ was born, is nearing the end of a years-long renovation. For the first time in hundreds of years, visitors to the church will soon be able to see intricate floor mosaics dating back to the 4th century.

The church is the oldest one in the world that is still in service. It was first built under Emperor Constantine but most of the existing structure dates back to the Emperor Justinian, in the mid-6th century. Today, Catholics, Greek Orthodox, and Armenian Orthodox Christians share responsibility for maintaining the church. 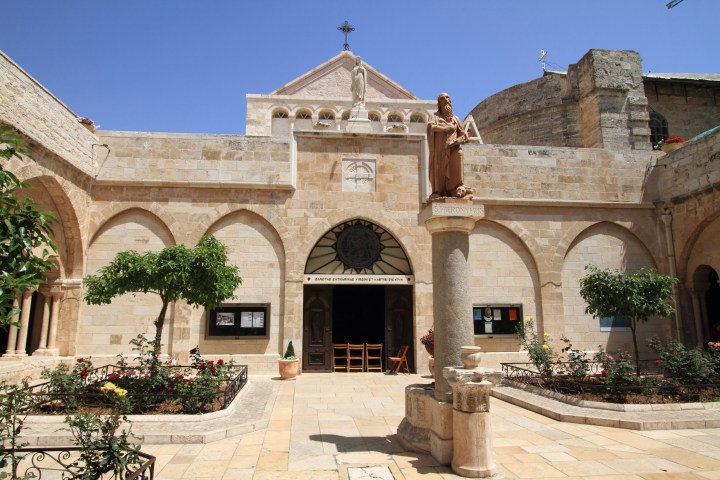 The project began after UNESCO listed the Church of the Nativity on its World Heritage List in 2012. The church met two criteria for the list. It is “an outstanding example of an early church in a remarkable architectural ensemble” and it commemorates the birth of Jesus “an event of outstanding universal significance.” UNESCO also identified it as a site “in danger.”

The church had a rotting roof and a 500-year-old truss structure with leaks that were letting water damage ancient paintings and mosaics, according to Smithsonian magazine.

The $17 million renovation, which is being led by the Italian firm Piacenti SpA, started the year after the UNESCO designation. Giammarco Piacenti, the CEO of the firm, said that his workers felt like they were “touching heaven with their fingers,” according to an AP report last year.

The restoration has addressed the roof, exterior stones and walls, and interior mosaics, according to a recent AP report.

The project has also led to the discovery of a window mosaic with an angel.

The site is a major tourist destination, drawing between 1 and 2 million people a year.

The Church of the Nativity is located in Bethlehem, about six miles south of Jerusalem. It is in Israeli-occupied West Bank—circumstances that allegedly have hampered efforts to restore the church in the past.

Despite its more recent dilapidation, the church has weathered centuries of conflicts and been spared destruction. During the 614 invasion of the Persians, the church was preserved because of a mosaic of the Magi depicting them in Persian garb, according to Smithsonian. The church has also survived the crusades and five centuries of rule by the Ottoman Turks. The church is currently managed by Catholics and various Orthodox groups according to an agreement known as the Status Quo of the Holy Places, set by the 1878 Treaty of Berlin.

The interior church is filled with mosaics of saints, angels, and Church councils. Trapdoors in the floor of the current structure allow visitors to peer down onto the mosaics from the original Church built under Constantine. The interior pillars also have Crusader-era images of saints, according to the description on one tourist site.

The renovation is set to be done by the end of 2019, according to the latest report.

Thus far, the church has already been transformed, reports say. “It has become such a beautiful church,” Ziad al-Bandak, the head of a committee overseeing the work told the AP. “Every Christian in the world would love to see it now.”