Christmas in Bethlehem: a traveler’s guide

A visit to Christ's birthplace would be a trip of a lifetime.

Visiting Jerusalem and its surroundings sites can prove to be a rewarding experience any time of the year. But when it comes to Bethlehem, there is probably no better time for a trip than during Christmas.

Unfortunately, due to the global coronavirus pandemic, Bethlehem’s tourism industry has virtually shut down this year. There’s no reason, though, that we can’t begin planning a trip for next Christmas.

That’s when a towering Christmas tree is erected in Manger Square, Bethlehem’s central square, and where nearly every building of this historic town gets decorated with festive ornaments. But most all, Christmas is the best time to feel a sense of harmony among faiths, as believers of Catholic, Protestant, Orthodox and Armenian Christianity travel from all around to world to attend Christmas Mass celebrations inside the historic Church of the Nativity, built on the site where Jesus was born.

Bethlehem is part of the West Bank territories and can be reached from Jerusalem by bus or car in less than an hour. It is separated from Jerusalem by a 437-mile long wall, the West Bank Barrier. In recent years, this global symbol of territorial conflict has served as canvas for international artists like British street artist Banksy, who painted a dove carrying an olive branch as a symbol of peace.

Bethlehem is welcoming to members of all Christian faiths, with each different branch coming to town to celebrate Christmas at different times: Catholic and Protestant celebration comes first on December 25, the Orthodox celebration takes place on January 6, and the Armenians celebrate on January 18.

Bethlehem offers many options for accommodation, from bed and breakfast to hotels and guesthouses. But if you are looking for a historic location, the best option is probably the Casanova Palace, in the old center of Bethlehem, right next to the Church of the Nativity and the Chapel of Saint Catherine. The Palace offers two structures equipped with rooms, TV, laundry and a chapel: Casanova (reservation@casanova-bethlehem.com) and Casa Nova Oriental Palace (reservation@casanova-bethlehem.com). 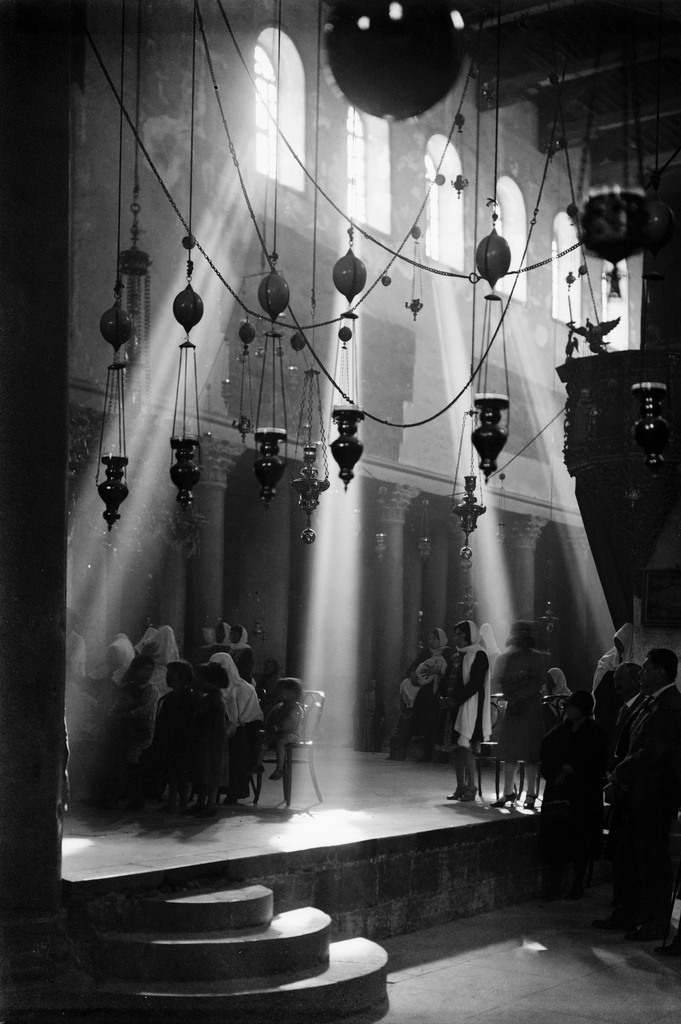 Church of the Nativity

The Church of the Nativity was built over the cave where Christ was born. Construction started in 327 after a commission was issued by Constantine the Great. Over the years, the initial structure was expanded to accommodate three monasteries belonging to different branches of Christianity: the Roman Catholic, the Greek Orthodox and the Armenian Apostolic. Today, the complex extends over an area of 12,000 square meters, making it one of the largest religious sites in the world. The very spot where Jesus is said to have been born is marked by a underground crypt known as “The Grotto of the Nativity,” a small cave situated underneath the main altar. Inside this crypt lies a a 14-pointed silver star bearing the inscription “Here Jesus Christ was born to the Virgin Mary-1717.” The star was originally placed there by Catholics in 1717 only to be removed in 1847 and re-installed in 1853, this time for good. The 15 silver lamps surrounding the silver star represent the three branches of Christianity who share the Grotto: six lamps belong to the Greek Orthodox, four to the Catholics, and four to the Armenian Apostolic. Two other sections of the Grotto are home to other shrines: the Grotto of the Manger, marking the spot where Mary laid Jesus in the manger, and the Altar of the Magi, where the Wise Men paid their visit to Christ Child.

Every year, Catholics gather inside the Chapel of Saint Catherine, adjacent to the Church of Nativity, to attend Christmas Mass celebrated by the Latin Patriarch of Jerusalem. One of the highlights of this chapel, which is dedicated to Catherine of Alexandria, a Christian saint who was martyred in Alexandria of Egypt in the 4th century, is a bas-relief of the Tree of Jesse that was donated to the chapel by Pope Benedict XVI during his trip to the Holy Land in 2009. The artfully crafted sculpture represents the genealogy of Jesus from Abraham through Joseph, culminating with the figure of an open-armed Christ embracing the earth.

Built in 1872 on the site of a previous Byzantine church, the Chapel of Milk Grotto is home to three underground caves that are believed to have hosted the Holy Family as they were seeking refuge from the Massacre of the Innocents, when King Herod the Great ordered the massacre of all male children younger than two years old after hearing that a “new King” had been born. It is said that during the Holy Family’s stay inside the cave, a drop of Mary’s milk fell on the floor leaving the floor white, which is why many believers that struggle with infertility come here to pray for the blessing of pregnancy.

Located 8 km from Beltem, this 5th-century monastery was founded in 476 by Theodosius the Cenobiarch, the founder of cenobitic monasticism, a monastic tradition centered on community life. The original structure, built on the spot where the Three Magi took shelter the night after they delivered their gifts to newborn Jesus, was destroyed in 808 during the Persian invasion. A new fully-functioning monastic structure was rebuilt hundreds of year later, in 1952, by the Greek Orthodox Church. The original “Grotto of the Magi” and the tomb of Theodosius are still preserved in situ.

Bethlehem’s central square is the focal point for all of the Christmas celebrations in Bethlehem. Every year in December, the towering Christmas tree is decorated with beautiful multi-colored lights. This is where to catch locals and visitors singing Christmas carols or watch a live-stream of midnight Mass on giant screens placed near the Christmas tree.

Located on the cliff edge of a deep ravine overlooking the Kidron Valley, Mar Saba, literally “Saint Saba,” was founded in 483 by Sabbas the Sanctified, a Cappadocian-Syrian monk. Today, it is still an active monastery, hosting an estimated 20 monks, making it one of the oldest operational monasteries in the world.

Where to go for Christmas Mass

Midnight Mass for Catholic believers is held in Saint Catherine’s chapel, right next to the Church of the Nativity complex. Make sure to get tickets in advance as places are limited and tickets sell out fast. Tickets can be booked here: http://www.cicts.org/default.asp?id=353

For those who didn’t secure a ticket on time, don’t worry: you can still watch the service live-streamed on one of the giant screens set up in Manger Square.