Why parents constantly get their kids’ names wrong 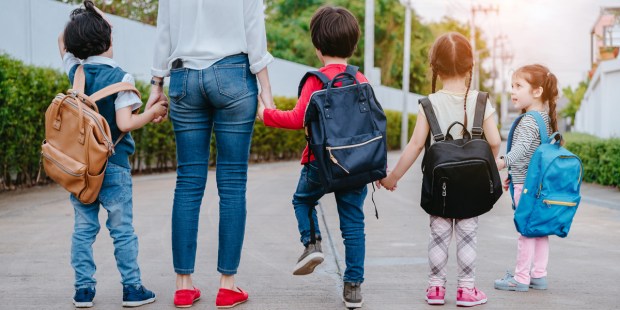 It’s not because of parent-brain overload …

That’s a sentence I say nearly every single morning, with varying degrees of intensity and infinite combinations of names. But one thing is certain: I will invariably run through three to four incorrect children’s names before I hit upon the name of the child I’m actually speaking to.

Lincoln will often pop up in front of me just as I get it right, grinning and saying, “I’m Lincoln, Mommy!” My kids are used to me calling them by literally all of their siblings’ names because I’ve been doing it since they were born, despite vowing to myself as a child that I would never, ever, under any circumstances, call one of my children by the wrong name.

I know, ridiculous, right? Not so much that I call my kids by interchangeable names, more the fact that I ever thought it would be otherwise. I grew up being called “Hudson-Jackson-Micah-CALAH” just like every other kid I knew with siblings. As a kid, I can remember wondering what was wrong with my mother … and luckily for me as an adult, Quartz has an answer: according to science, misnaming is a result of overwhelming motherly love:

In this mind map, a mother likely associates her children with one another. When attempting to retrieve the name of her son, she is more likely to inadvertently select the name of her daughter than the name of a colleague due to the close connections between her children’s names in her semantic network. In other words, your mom calls you by your sibling’s name because she loves both of you, and associates you with one another.

I am incredibly relieved to learn that the misnaming phenomenon is not early-onset Alzheimer’s or some form of absolute mental breakdown brought about by motherhood, because even when I’ve made a concerted attempt to call my children by the correct names, I fail. They are, and always will be, Sienna-Charlotte-Lincoln-Liam-Isaac. Not because I don’t love them enough to call them by the right name, but because I love them all too much to put them in separate semantic networks. And the next time they call me out on it, that’s exactly what I’m going to tell them.