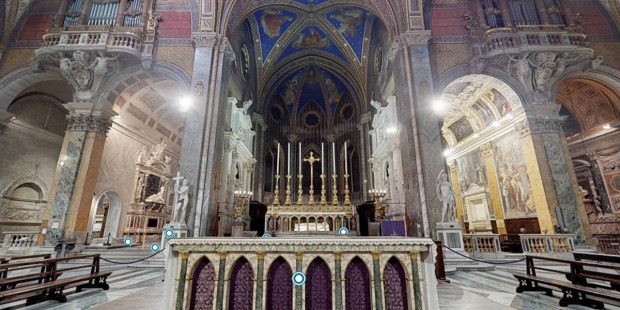 Vadis VR is a way for anyone with an internet connection to better appreciate the glory of Rome.

Amy Giuliano noticed something when she was giving church tours in Rome a few summers ago. Many of the tourists she led through masterpieces of architecture such as Santa Maria Sopra Minerva or San Silvestro would not likely be classified as religious people. But they listened intently to Giuliano, an American studying theology in Rome, as she expounded on points of doctrine related to the art works they were viewing.

“It was so interesting to me that people who were tourists and hadn’t darkened the door of a church in a while were completely open to hearing everything about our faith,” said Giuliano. “Every single thing I was learning at the Angelicum [the Pontifical University of St. Thomas Aquinas], I could communicate to them, and their walls were completely down; they were interested in hearing about it.”

That included stories from the Bible, theology, liturgical topics, Mariology, the lives of the saints, and spirituality.

And it wasn’t just that she had a captive audience.

“Rome is a living classroom, and you bring tourists inside these churches and you explain the art and architecture, why this space looks like it does,” she said in an interview. “So I just felt like, with people in front of beauty, they would be completely open to hearing all about what I was learning.”

When Giuliano came back to her native Connecticut to work on a master’s degree in sacred art and architecture at Yale Divinity School, she took a job teaching at a nearby Catholic university. And she had another revelation: she was trying to impress upon her students the significance of the Church’s artistic patrimony, but most of them had never been to a place like Rome—and were unlikely to ever go there. For many Catholic students, if not most, their experience of the Church had not gone much beyond their local parish church.

“I was just frustrated because I knew that the vast majority of my students would never experience some of these incredible sites of religious and artistic heritage around the world that I have had such a wonderful opportunity to experience firsthand,” the 31-year-old said. “How could I expose them to this incredible beauty?”

There are photos and slideshows, of course, but two-dimensional images are detached from their context. From them, students won’t get a sense of size or scale, “or even the grandeur of the space,” said Giuliano, who also writes for Magnificat magazine. “I remember when I was little, and my dad took me to Istanbul. We walked into Hagia Sophia, and I was absolutely bowled over by that space, and I thought ‘How can I communicate that to students?'”

Videos might be somewhat better—if you could find quality videos. But watching them is a passive activity, anyway. “You’re sitting there watching, but you’re not actually able to explore and engage the space,” she said, “and I found that personal exploration of a sacred space was the most transformative learning experience, at least for me.”

At Yale, meanwhile, she had to write art history papers on sites she had never visited, “just by piecing together images from books and what-not, that were of better or worse quality. That’s not where scholarship should be.”

Nothing seemed satisfactory. Except possibly VR—virtual reality. Giuliano decided to find out, so she trained in VR technologies, traveled to Rome on spring break and took VR recording equipment to some of the churches where she used to give tours.

The resulting videos were a “treat for my students,” who were more engaged with the learning, she said. “I would send them home with a site for homework and allow them to personally explore [a VR-recorded church on their computers] and then come back to class having chosen the one thing they found most visually intriguing or interesting and then explain that piece of art or sculpture or whatever it was to the class and why they found it interesting.

“I was really happy that they realized that not all churches look like the one down the street,” she said.

Giuliano’s project also won a competition for young entrepreneurs at Yale, giving her a $15,000 grant and access to Yale’s school of management and law school so she could develop the concept into an enterprise. She calls her start-up “Vadis VR,” taking the name from the apocryphal story in which St. Peter encounters the risen Christ as he is fleeing the persecution in Rome. Peter asks Jesus, “Domine, quo vadis?” (“Lord, where are you going?”)—to which Jesus answers, “I am going to Rome, to be crucified again.”

Vadis VR allows viewers to virtually enter a church, either on a computer screen or using a VR headset, and click around to explore its art and architecture. There’s audio, visual, and textual content, providing an all-encompassing “lecture” on the history of the church, the music of the period in which it was built and the theology that informs its artwork.

Giuliano provides educational-content distributors and university departments access to the content on a subscription basis but is also open to creating specific virtual tours on commission. Individual subscriptions might be available in the future. She has plans to return to Rome to record more churches, and will branch out to other cities as well, such as Paris. A professor at Yale is interested in having her record some Byzantine churches in Greece and Turkey and merge the tours with binaurally-recorded Byzantine chant.

For her students, she said, the VR experience has helped them understand why “people for hundreds of years have been working on making sacred sites beautiful. Why did they do that? What does this art mean? It just leaves an impression on the importance of what’s being presented in that space.”

Readers can take a sample tour of Santa Maria Sopra Minerva, above. The Roman church is home to Michelangelo’s Christ the Redeemer, a Bernini monument, the Renaissance frescoes of the life of St. Thomas Aquinas in the Carafa Chapel, and the tombs of St. Catherine of Siena, Fra Angelico, and Cajetan.