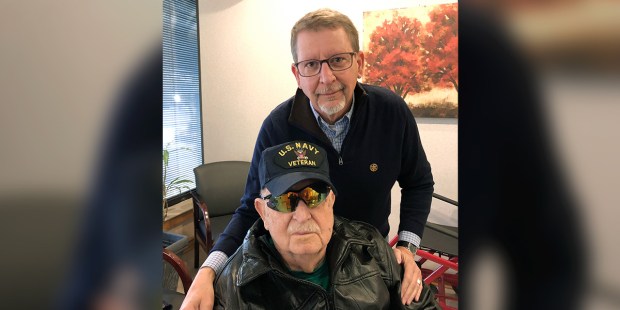 Pastor says the second most powerful force in the universe is story.

Bill Mead spent a lifetime serving others — his family, his country, his church. Born into poverty, he worked hard, got educated, joined the Navy, and later became a minister. Mead was eventually diagnosed with dementia and recently his family made the difficult decision to place him in specialized care. But his illness doesn’t take anything away from the unique person he is, and Mead’s son Patrick was determined to make sure everyone knew this.

Patrick, who is also a minister, believes in the power of story to change people so when his father went into care, he decided to tell the story of his dad’s life in a simple but powerful way.

“My fear was here’s this man among strangers, they don’t know him.” Patrick Mead told News4. They don’t understand who he is, and he can’t tell them so I wrote just a short set of sentences and we had it posted on his door.”

The note begins with “My name is Bill Mead” and ends with “Thank you for remembering who I was and who I am.”

Patrick believes that telling the story of our loved ones — especially when they can’t do it themselves — is an important way to “to remember the preciousness of others.”

His note was shared thousands of times on social media and has received more than 100,000 likes.

I had to place my father in dementia care today and drive away. I can only be there every couple of weeks so I taped this to his door. I want the staff to know who the new man in #14 truly is. pic.twitter.com/JLkeb1d3x7

Read more:
Why your kids need to hear you reminisce about your childhood