The history of Christmas tree lights: From fire hazards to “festoons” 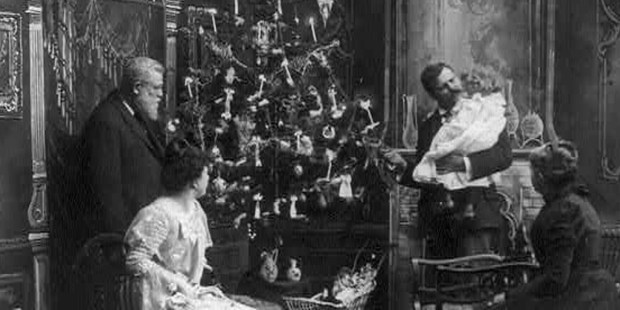 Library of Congress | PD
A family gathered around a Christmas tree with lighted candles in 1900.
Share
Print
J-P Mauro - published on 12/18/18

Christmas tree lights have evolved quite a bit over several centuries.

There are few things that can inspire seasonal awe like a well-lit Christmas tree. All around the world, cities erect large trees with elaborate light displays that draw crowds from miles around. While today these trees serve as a beacon of light in the darkest time of the year, the tradition of lighting the Christmas tree is one that was developed over many centuries.

The earliest ritual use of evergreens and lights come from the ancient pagans, who used the combination to symbolize life in the dead of winter. It is believed Christians first adopted the Yule log from pagans — although there is no existing reference to its Christian use prior to the 16th century and it may have been unrelated to the pagan practice — and soon they were bringing evergreen trees into their homes.

The Christmas tree was brought to America by the German-speaking Moravians, who settled in Pennsylvania and North Carolina, in the early 19th century. By the 1820s the Christmas tree had become popular and is referenced in the journal of Matthew Zahm of Lancaster, who witnessed his friend “on the hill at Kendrick’s saw mill” looking for a good tree to put in the living room.

In 1851, Mark Carr opened the first Christmas tree retail business, taking trees from the Catskill Mountains and bringing them to New York City’s Washington Market. Five years later, the Christmas tree was cemented as an American tradition when President Franklin Pierce had the White House tree decorated for the season.

As more people welcomed Christmas trees into their homes, they began to notice problems with the candle-lit design. The first hurdle was securing the candles to the branches. People tried pinning the candles down with needles, tying them with wire or string, and even using melted wax as an adhesive. Unfortunately, none of these methods seemed to work.

In 1878, Frederick Artz invented a clip-on candle holder that could firmly attach a candle to any branch, but this only emphasized another danger, that the trees had become fire hazards. In those days, Christmas trees were only kept lit for about 30 minutes, and even then they required a lot of attention and buckets of water and sand close at hand.

Accidental Christmas tree fires became prevalent and eventually insurance companies stopped paying out for fires started due to candle-lit trees. With Christmas trees as popular as they were, it was clear an alternative light source was necessary.

In 1882, Edward Johnson, vice president of the Edison Electric Light Company, answered this call with the first electrically illuminated Christmas tree. As Johnson lived in the first section of the city to be wired for electricity, he displayed the tree, featuring 80 hand-wired red, white and blue light bulbs, in his own home.

Edison was impressed by the idea and over the next 8 years, he and Johnson refined the electric light strings until they had a marketable product they called, “Edison miniature lamps for Christmas trees.” The new, safer lights took the nation by storm after President Grover Cleveland featured them on the White House tree in 1895; however, as the lights had to be hand-wired and powered, they would remain prohibitively expensive for the average American.

In 1903, GE offered the first ever pre-wired Christmas lights. Still very expensive — each string cost $12, slightly less than the average weekly wages of the time — these “festoons,” as they were called, came with eight miniature colored glass lamps and a screw-in wall socket.

GE attempted to patent the lights, but as the technology was based on common electrical knowledge, it was refused. Because of this, several competitors arose, including the National Outfit Manufacturers Association (NOMA), which went on to become the NOMA Electric Company. NOMA dominated the Christmas light industry until the 1960s when competition from foreign imports drove them to bankruptcy.