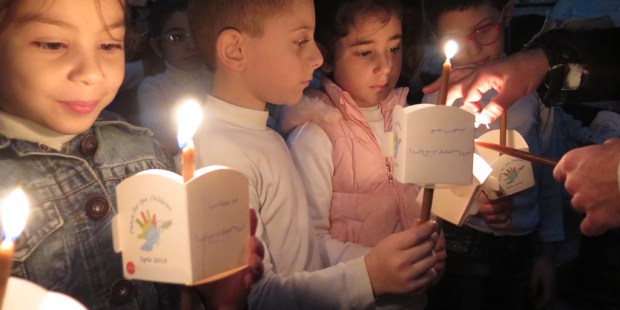 Pope Francis begins a campaign for peace with the symbolic lighting of a candle.

The international Catholic pastoral charity and pontifical foundation Aid to the Church in Need (ACN) has begun a Christmas campaign of prayer, aid, and solidarity for the benefit of Syria’s people. The campaign, Candles for Peace in Syria, was kicked off on the 2nd Sunday of Advent, when Pope Francis lit a symbolic candle after the Angelus prayer.

The initiative has already involved 50,000 children of different religions from some of the cities that have been hit hardest by the war, including Aleppo, Damascus, Homs, Marmarita, Hassaké, Tartus and Latakia. The children decorate their own candles with symbols of peace — crosses, doves, prayers — and pray together for a lasting peace in their land.

Far too often, these little Syrian children have become the prime victims of the conflict which is still ongoing. Now, ACN is making a worldwide appeal to those of good will to respond to the children’s cries for peace by lighting a candle to amplify their prayerful call for peace.

The candle which Pope Francis lit to begin the campaign was designed by a local craftsman from the Bab Touma quarter of the Old City of Damascus. The large candle features around 40 pictures of Syrian children, most of them from Aleppo, along with the logos for ACN and Candles for Peace in Syria.

In 2016, ACN, as advocates of the Syrian children, appealed to the European Parliament by sharing with them hand-drawn pictures from the children, which illustrated their longing for peace.

Alongside Candles for Peace in Syria, ACN is launching an international fundraising campaign in response to the critical humanitarian situation in Syria and in order to prevent the disappearance of the Christian presence in the country. Organized through its 23 national fundraising offices they hope to help with emergency aid, reconstruction aid and pastoral support.

ChristiansofSyria.org describes all that the ambitious program hopes to provide:

The distribution of food parcels and other basic essentials, including medicines, milk powder for babies, support with rent and heating costs for the refugees, rebuilding of the homes of the Christian refugee families as well as their churches and religious houses, support for the priests and religious who are ministering to them, spiritual and psychological support for the traumatised, help with school and education fees for school children and young students and, last but not least, simple Christmas parcels for over 15,000 of the poorest and most destitute children.