Why do we neglect St. Joseph? 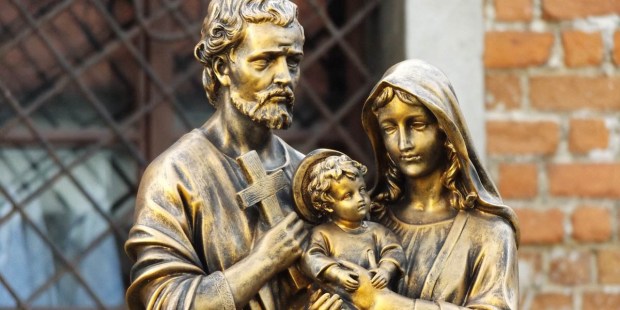 Do you ever feel sorry for the saints? I do—especially for the saints whose legacy has been misunderstood or betrayed. I think particularly of St. Francis of Assisi, who in popular culture is often depicted as a tree-hugging vegetarian hippie singing goofy songs. My own St. Ignatius Loyola has been subject to similar misappropriation. In some circles he’s depicted as the spiritual grandfather of all social justice warriors, the inspiration of those who worry about plastic straws, free speech zones, and the insufficient redistribution of wealth by armed government agents.

The saint who could well be acknowledged as the most misunderstood and least appreciated may be St. Joseph. I say that first of all because a student once told me, “Poor St. Joseph! Everything is his fault! His wife is immaculately conceived and his foster son is divine, so if there’s any problem in the Holy Family, Joseph must be the one to be blame!”

I directed that student to Matthew 1:19, which described St. Joseph as a “righteous man.” The Hebrew Scriptures are replete with praise for the “righteous man” or the “just man.” Almighty God would not entrust Mary the Theotokos and the Divine Son to some random guy off the street. St. Joseph was above reproach.

Sadly, St. Joseph has been depicted artistically in a way that I believe fails to do him justice. Consider this sculpture depicting the Holy Family during their flight into Egypt. I understand the importance of the symmetry of the figures relative to the cross in the background. I’m saddened however, that St. Joseph, like the donkey, is facing away from Mary and Jesus and has no physical contact with them. One might be tempted to view this sculpture as a way of conveying that the really important figures are Mary and Jesus only, and Joseph came along just to steer the donkey. I doubt that was the sculptor’s intent, but this sculpture, and other artwork often fail to depict the human warmth and divinely-sustained devotion that St. Joseph surely had for Mary and Jesus.

In popular culture, especially in the West, husbands and fathers are often portrayed as buffoons or unreliable. Sadly, many men have abandoned or even refused to take up their responsibilities as husbands and fathers. In the United States, family courts are often biased against men. In any case, there is no doubt that fatherlessness is catastrophic for women and children.

In this context, and especially as the season of Advent moves into the season of Christmas, let’s take a closer look at the merits and message of St. Joseph, especially in his divinely-appointed role as guide, protector and provider for the Holy Family. I’d like to focus on one aspect in particular, namely, the way that St. Joseph must have regarded Our Lady.

One of my earliest memories is of my father coming home from work, and the first thing he would do once he got through the door was to embrace my mother. Even as a very little child, I could perceive that coming home to Mom was the high point of Dad’s day. Surely the young Jesus saw modeled for him by St. Joseph respect, reverence, love and gratitude for Mary, his wife. Wouldn’t it be desirable and edifying to portray the Holy Family as a married couple who love each other and love the child God gave them? How about something like this? Or this?

Human history is now under a cloud. The Church is undergoing a time of trial. We need men, regardless of their state in life, to rise up and become the true fathers God has called them to be. Let’s resolve to give thanks for the godly men we know who have become good fathers. Let’s resolve to teach young men who want to be fatherly men of God but don’t know how. Let’s intercede for those men who’ve failed or given up. And until the end of the Christmas season, let’s pray together this ancient prayer:

O Saint Joseph, whose protection is so great, so strong, so prompt before the throne of God, I place in thee all my interests and desires. O Saint Joseph, assist me by thy powerful intercession and obtain for me all spiritual blessings through thy foster Son, Jesus Christ Our Lord, so that, having engaged here below thy heavenly power, I may offer thee my thanksgiving and homage.

O Saint Joseph, I never weary contemplating thee and Jesus asleep in thine arms. I dare not approach while He reposes near thy heart. Press Him in my name and kiss His fine head for me, and ask Him to return the kiss when I draw my dying breath.

Saint Joseph, patron of departing souls, pray for me.

When I write next, I will offer some reflections on the Christmas season. Until then, let’s keep each other in prayer.